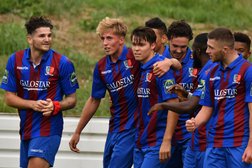 Jammers Come Out On Top In Derby

Maldon & Tiptree rose to the top of the early Bostik North division on Saturday, thanks to a 3-2 win against neighbours Heybridge Swifts.

The visitors had two early chances to take the lead, with Bantick rounding the keeper before spurning the chance with a heavy touch, whilst Ramon-Carrero driving in a fierce cross that Callander was close to getting on the end of.

They got their noses in front on 21 minutes, as Henshaw got on the end of a corner to poke into the back of the net.

However, the Jammers were immediately level.

Following his goal in the Emirates FA Cup at the weekend, Decarrey Sheriff got another, driving home into the top of the corner to make it 1-1.

Callander forced a good save out of McNamara just after the half hour mark, before the home side went ahead for the first time on 36 minutes.

Shane Cojocarel was the goalscorer, slotting home from close range after Luke Holness' effort came back out to him.

The second half continued as the first had left off and it was soon 2-2, as Gardner scored from close range to bring the Swifts back into the match.

Again, though, parity was not to last for long, as Cojocarel got his second of the game.

Shepherd sent over an excellent cross and the Jammers man headed home to put Maldon back in front.

Callander had a shot go just wide, before a last ditch clearance saw the ball cleared off the line as Heybridge pressed.

And, despite chances being traded in the last quarter of the game, Maldon held on for a win to continue their good start to the league season.