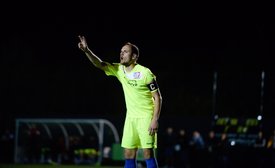 Having joined mid-way through the 2019-20 season, Stokes made his debut against Enfield Town in the Buildbase FA Trophy on 23 November 2019, Stokes' 50 appearances comes after almost two calendar years with the Jammers.

The commanding central defender was named as club captain at the start of the 2020-21 season, leading the Jammers to the FA Cup First Round and Third Round of the FA Trophy, in the clubs longest every FA Trophy run during that season.

So far this season, Stokes has appeared twelve times this season, recording two assists and marked his 50th appearance with a goal on Friday evening, his sixth goal for the club.

Everyone at the club would like to congratulate Stokes on this achievement and we look forward to the next fifty appearances for the club.