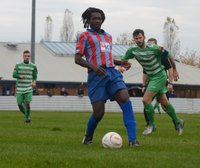 Akurang proves too much for the Ambers

The Jammers won away from home 4-2 against Cheshunt, thanks to a hat-trick from striker Cliff Akurang (pictured).

The Jammers continued their rise up the league table with a gritty win at Cheshunt. A hat trick scored in just 21 minutes over two halfs by Cliff Akurang was just enough to see them home against a team reduced to 10 men with most of the second half still to play.

After a cagey opening the game came to life with an attack by the home side that saw Allen Bossman getting in a good low cross that reached Joe Clemo who got a good shot in that visiting keeper Lewis Moore turned away well at the expense of a corner. From the resultant corner, after 10 minutes, the home side took the lead when the kick was aimed at the far post for the unmarked Adam Bolle to easily head home from close range. This stung the visitors and Cliff Akurang turned well in the opposition box to get a shot in that was put off for a corner from which Alberto Pinto shot over. After 16 minutes the home side committed defensive suicide on the edge of their own penalty area with an awful error that gifted possession to the Jammers Tunde Adewunni and he was able to move forward and easily plant the ball into the back of the net. The visitors continued to attack and Adewunni was again involved when he found himself in the box but could only get a weak shot away that was cleared for a corner and when this kick resulted in a goalmouth scramble Akurang's close range shot was cleared off the line. After 32 minutes the visitors pressure was rewarded with a second goal when a Nathan Koranteng cross into the goal area was pounced on by Akurang and he turned and fired a low shot into the net. The home side did produce a few chances mainly through the speedy Bossman and he made a good chance for himself with a good run but then fired over from the penalty area edge. Maldon and Tiptree's defensive frailties were again exposed after 44 minutes when a long throw from Cheshunt's Luke Illsley landed in the visitors box and despite a number of efforts to get the ball clear Bolle got a close range shot in that Moore did well to turn away but the ball fell kindly for Mete Sem and he easily converted from close range. The topsy turvy half continued with a further goal for the visitors right at the end of normal team when the home side conceded a free kick just outside their penalty area and Akurang stepped up to fire a deliberate effort into the top corner giving home keeper Glenn Williamson no chance. This goal was a rare bright spot in a half that, although it contained five goals, turned out to be a pretty scrappy affair .

Looking to quickly increase their half time lead Maldon and Tiptree's Adewunni was unlucky not to add to his, and his teams tally when a strong drive from at least 30 metres crashed against the home sides cross bar and rebounded out. The visitors were not to be denied and after 52 minutes moved further ahead when Akurang gained possession of a long ball forward to go clear against keeper Williamson and the home custodian bought the forward down to deny what the referee deemed a goal scoring opportunity. The keeper was sent off and after a long delay to change the keeper Akurang kept his cool to convert the penalty kick and complete an excellent hat trick. As so often seems to happen the teams that are reduced to ten men then go on and play better than they did with eleven and this was certainly the case with Cheshunt. They nearly pulled a goal back with a good move down the right that ended with a ball pulled back from the by line that was only just cleared by a nervous looking visitors defence before going even closer when Aryan Tajbakhsh's delicate free kick forward found Josh Fagbohun in the clear in front of goal but although his header went over keeper Moore it hit the top of the crossbar before going over. A Cheshunt free kick by Bolle was then just pushed away by the visitors defence before the rebound was just put away for a corner then Bolle just missed connecting with a ball across the penalty area. The visitors were trying to take advantage of their spare man with quick balls forward and this was almost rewarded but again the woodwork came to the home sides rescue when, after Koranteng's shot was saved by the stand in keepers legs the ball was played back in for Akurang to hit the bar with his shot before Koranteng's 25 metre effort suffered the same fate. For the last ten minutes the visitors were content to play out time and protect their lead which resulted in little in the way of goalmouth incidents but based on the whole 90 minutes the visitors just about the deserved the win but the home side can take some satisfaction with how well they played with only 10 men.