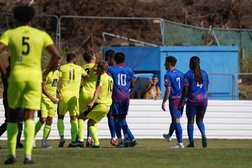 Paul Abrahams' first game in permanent charge ended in defeat, in what was a disappointing opening day of the season.

In his first game in charge since taken over as Manager, Paul Abrahams handed out several debuts from the start, including to several returning faces. Tom Middlehurst made his debut between the sticks, whilst Brad Ihionvien, Harvey Sayer, George Forrest Laste Dombaxe, Lance Akins and Johnville Renee made their first, second or third debuts for the club.

After finishing last seasons campaign, the Jammers would've been looking to get off to a positive start and looked in command throughout the first half, without being able to take their chances in front of goal. Ihionvien went closest as his effort was tipped on to the bar, whilst Forrest had a headed effort cleared off the line. Up the other end, Middlehurst was called in to action on just two occasions, making two saves to keep his clean sheet in tact.

On the stroke of the afternoon, the game was flipped on it's head by the man with the whistle. After failing to blow for a free kick for a foul on Ihionvien, Maldon eventually won a free kick as Scott Kemp was pulled to the ground. Following the free kick, a scuffle broke out which appeared to stem from nothing, as the players pushed and shoved, Kemp was pushed to the floor and Laste Dombaxe intervened in an attempt to split up the altercation. In doing so, the Referee adjudged Dombaxe to have acted recklessly and gave him his marching orders, with a straight red card. Kemp was cautioned as a result of the incident, whilst Billy Harris somehow escaped with only a yellow card, when on another day, could've perhaps been shown a red.

In the blistering heat, the second half was always going to be a tough ask for Abrahams' Jammers with a man less than their opponents. In the 52nd minute, things became even tougher for the home side. As Ihionvein conceded possession on the halfway line, the visitors broke forward and punished the Jammers. With Sayer trying to track back from his forward run, Billy Harris who should've been sent off in the first half, found space in behind the defence, cut in side and beat Middlehurst at his near post, with the ball landing in the back of the net.

Despite being a goal behind and a man down, the Jammers continued to look dangerous in attack and dominated possession whilst Tilbury appear comfortable being camped in their own half, looking to spring a counter attack when the opportunity presented. Abraham's rang the changes with Bradley McClenaghan and Logan being introduced in efforts to spark something in attack.

Within moments of coming on, Logan almost recorded his first Jammers goal, however the Tilbury shot-stopper made a diving save to keep Dylan at bay. Up the other end, Sam Coombes provided a last ditch tackle prevent Roman Campbell from extending his sides lead, as the Jammers defence survived. The substitutions made by Abrahams almost had the desired impact, as McClenaghan skipped his way through midfield, but was unable to control the ball on a hard concrete-like surface, as the ball bobbled out of his control to deny what would have been a cracking individual goal. Up the other end, Middlehurst made a superb save to deny the ever dangerous Campbell.

As the Jammers pushed forward for an opening day equaliser, they were unable to convert a number of half chances with Logan, Ihionvein and Sayer all going close to the first goal of the season. In the 89th minute, the visitors secured all three points with a breakaway goal after Joe Turpin conceded possession inside Tilbury's half. Alex Clark broke away and despite a last ditch challenge, the dangerous winger provided a delicate chip over the onrushing Middlehurst to hand his side all three points on the opening day of the season.