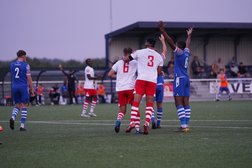 Maldon & Tiptree suffered their second defeat in as many games as they lost away from home against Grays Athletic.

Manager, Paul Abrahams made changes to his starting eleven, handing Dylan Logan his first start in a Jammers shirt, whilst Brad McClenaghan made his first start of the season after appearing as substitute on Saturday.

It's fair to say that the opening stages of the contest were controlled by the Jammers, sporting their new away kit for the 2022/23 season. However, inside the first ten minutes, Tom Middlehurst made two good saves to deny Grays. In the 14th minute, George Winn was lucky to escape a red card as his second late tackle resulted in Logan being left in a heap, whilst Winn survived. From the resulting set piece, Danny Sambridge was on hand to make a great save to deny youngster Brad Ihionvien.

In the 19th minute, the Jammers appeared to have opened the scoring however following a period of confusion, the goal was ruled out. George Forrest swivelled inside the penalty and diverted the ball beyond Sambridge, with the Assistant Referee keeping his flag down, the Referee decided to disallow the goal for offside after some persuasion from the home defence.

The Jammers continue to feel hard done-by as appeals for a penalty were waved away, before Grays went close up the other end to opening the scoring. In the 34th minute, things went from bad to worse as the hosts opened the scoring for the evening within their first goal of the season. A quick throw-in on the right wing caught the Maldon defence off guard, with full-back Courtney Homans skipping through the defenders who only watched on, before Homans toe-poked the ball beyond Middlehurst, who could've perhaps done better.

Maldon almost responded immediately, with Sambridge spilling an effort from Kamani McFarlane for a corner. With half-time approaching, the Jammers clung on and had Middlehurst to thank for keeping the deficit at just one. The tall shot-stopper made a string of saves to first deny Aaron Gordon and then Sam Bantick on the stroke of the break, after Laste Dombaxe conceded possession in a dangerous area.

During the interval, Abrahams made a double change in an effort to shake his team up. Scott Kemp and Jake Giddings were brought on, with the later making his Jammers debut, Joe Turpin and Brad Ihionvein were the men replaced.

The second half started and replicated the first half, with the Jammers wasting half-chances, whilst Middlehurst was called upon at the other end to once again, deny Gordan with a diving save. Forrest had the chance to tuck the ball in to the net for the second time in the evening, however the ball bounced away awkwardly on the plastic surface.

In the 66th minute, Kemp forced a smart save from Sambridge, followed by a header from the resulting corner which Lance Akins sent sailing over the bar. With twenty minutes left on the clock, Grays doubled their lead. Corey Davidson who had only just been brought on, tapped home at the far post with his first touch of the game, coming back to haunt the Jammers after making just the one appearance for them last season.

In truth, the Jammers looked relatively toothless towards the end of the match, without managing to force Sambridge in to anymore saves of note. Kacy Parish was introduced in the 75th minute, replacing Dylan Logan as Abrahams' made his final change. The final chance of the evening fell to George Forrest in stoppage time, however his drilled effort from inside the penalty are flew over the bar in what was the last kick of the match.