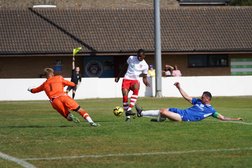 Third Defeat In A Row

The Jammers made the trip to the deepest park of Suffolk, to take on league leaders Lowestoft Town but sadly fell to defeat.

Paul Abrahams made a couple of changes from last weeks win over Harpenden Town, with Scott Kemp and Bradley McClenaghan returning to the starting XI.

Maldon started the brighter and created a number of opportunities in the opening stages. Scott Kemp fired wide early on, before Joinville Renee’s header at the far post was deflected for a corner. Next up to have a chance was Harvey Sayer, with a great pass from MArtyn Stokes finding the wide-man on his own in the box, but his drilled effort was well saved.

In the 17th minute, Abrahams’ men thought they had taken the lead. Sayer broke in behind the defence and laid it on a plate for Brad Ihionvien who calmly slotted the ball home, only to turnaround and the Assistant Referee had his flag up for offside. As so happens, minutes later the hosts ran up the other end and courtesy of some sloppy play from the Jammers, took the lead. Tom Middlehurst was guilty of conceding possession and the hosts capitalised, a ball in from the left found Jake Reed who tapped home unmarked at the far post, despite being in a possible offside position.

Two minutes later and in the 26th minute, Maldon thought they had equalised. Ihionvien tried his luck from distance with an audacious chip, with the Goalkeeper scrambling, the ball rebounded off the cross-bar with the home defence somehow surviving. The Jammers continued to push forward and unfortunately, continued to be wasteful in front of goal. Ihionvien headed over from eight yards, whilst Renee had a header blocked by the the home shot keeper.

To the delight of a number of travelling supporters, Maldon were awarded a penalty in the 39th minute after Renee was fouled inside the penalty area. Youngster, Ihionvien stepped up and confidently dispatched his penalty in to the bottom corner, despite the Goalkeeper kicking at the penalty spot prior to the kick being taken. On the stroke of the interval, Goalkeeper Middlehurst was called upon to make a quick save to deny the hosts.

Being unforetunate to be level at the break, the Jammers began the second half looking to continue their impressive performance. George Forrest almost gave his side the lead early in the second half, but the Goalkeeper made a sharp save from close range to deny Maldon’s central defender.

In the 58th minute, the hosts took the lead again. As the Maldon shape sloped to once side, Lowestoft capitalised and were slightly fortunate to take the lead. As Martyn Stokes charged down Chris Henderson’s shot, it took a wicked deflection and rolled in to the bottom corner beyond Middlehurst. The hosts then had two chances to extend their lead, but a save from Middlehurst and a last ditch tackle from Joe Turpin ensured the deficit remained at just one.

Sami Bassadi a recently loan recruitment from Braintree Town was introduced in the 70th minute for his Jammers debut, taking the place of Kamani McFarlane with the Jammers searching for a much needed equaliser. As the game drifted on, the contest became a scrappy affair to the delight of the hosts and despite plenty of huffing and puffing, Abrahams’ team were unable to find an equaliser and were condemned to their third league defeat of the season.