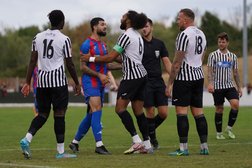 Maldon & Tiptree welcomed the inform Heybridge Swifts to Park Drive looking for our first points of the season in the local derby.

Ahead of the match, Paul Abrahams made 2 changes from the side that lost 2-1 at Lowestoft on Saturday with Scott Kemp and McFarlane dropping to the bench to make way for Dylan Logan and Benny Bioletti. Heybridge remained unchanged after their last match.

Dead-on 3pm, the Jammers kicked off the game. Early in the half, chances came at both ends with Swifts’ Rob Harvey coming close with a shot towards goal and a Maldon corner having to be cleared away by their defence. In the 5th minute of the half, Noble – a Heybridge player – goes down under pressure and Swifts are forced into an early substitution, replacing him with Carter.

Soon after, Maldon got the ball into the box when one of our players were pushed to the ground – bringing a penalty shout from the Maldon supporters. However, this was not given and the game played on. Throughout the half, Middlehurst claimed crosses from Heybridge attackers, preventing dangerous chances.

In the 21st minute, Fennel had a shot on the Jammers’ goal which was saved from a combined effort of Middlehurst and 2 of his defenders. This triggered a Maldon counterattack with a shot on goal being deflected by Swifts defenders before being retrieved by Heybridge keeper, Chafer.

In the 30th minute, Adlington-Pile hit the Maldon post, beating Middlehurst and Rob Harvey follows it in to convert the rebound for Heybridge Swifts.

In the immediate minutes following this goal, Heybridge sent chance after chance towards the Jammers’ goal with Stokes providing the helping hand in keep the scoreline to just one. In the 42nd minute, Ihionvien sends in Logan towards goal but a defender managed to catch up with him and make a last ditch tackle. Quickly after this, Ihionvien missed the ball from a cross while swinging for a shot and Renee was only able to put his effort wide of the target.

During half time, Logan was replaced by Komani McFarlane. Heybridge restarted the game and quickly moved up the pitch before their striker had a shot on target that forced a save from Middlehurst.

Following this, there was a passage of back and forth play with attacks at both ends without any clear-cut chances for either side. In the 58th minute, a Heybridge corner ended up on the head of their no. 5, Stephenson who could only put it wide. Midway through the half, the Jammers won an attacking free kick which Sayer took, but was put into the box but is cleared away by the Swifts defenders. In the 66th minute, a poor challenge by McClenaghan earned himself the first yellow card of the match. Soon after this, Coombes was replaced by Sami Bassadi in an effort to find a way back into the match.

In the 78th minute, a shot from swifts is saved by Middlehurst and put behind for a corner that was headed towards goal but ended up going for a goal kick. After the goal kick was sent up field, Maldon worked to send Sayer in for a shot on goal which was saved by Chafer and sent back up the other way.

Towards the end of the match, with tension from the derby overspilling, what would have been a simple Maldon free kick ended up resulting in a booking for Swifts’ Wall as he kicked the ball away from the taker of the set piece. When the kick was eventually taken, it was put wide by Sayer.

In the 88th minute, and the game heading towards another loss for the Jammers, Ihionvien tried desperately to win a free kick however, he was booked for simulation after diving in a wide-attacking position. One-minute before the end of the match, a Swifts cross found the feet of Fennel to convert for 0-2. But the game was not over yet, deep into stoppage time, a Maldon corner was put into the box, only for it to be headed home in an own goal by Heybridge’s own Carter. Soon after this, the referee blew for full
time.