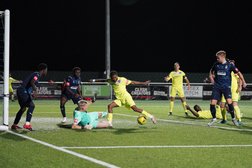 Maldon& Tiptree suffered their second defeat in a row, in an eight goal thriller away to Aveley.

Manager, Wayne Brown was without Bradley McClenaghan through illness, whilst John Gilbert was unavailable for selection following a car accident. New signing, Phillip Brown-Bampoe made his debut for the Jammers as he was thrown straight in to the starting XI.

Despite dominating the opening stages, the Jammers were once again punished for not taking their chances in front of goal. Aveley sprung a counter attack, as Marlon Adyakwa broke down the left, crossed the ball to Manny Ogunrinde who headed home from inside the six yard box, out-jumping Emmanuel Martins.

Things went from bad to worse for the Jammers moments later, as further goal mouth scrambles went by without being converted and the hosts soon extended their lead. A corner from the right found Ryan Scott inside the box, who had shrugged off his marker and volleyed home his effort, whilst unmarked.

As debutant Brown-Bampoe missed his effort from six yards, Brown's side were once again punished in the worst possible fashion. A long ball forward was allowed to bounce, it landed at the feet at Alex Akrofi who caught Ted Collins by surprise and unleashed a powerful effort that landed in the back fo the net, as the Millers found themselves three goals in front. Before half time the hosts had chances for their fourth, but Ogunrinde put his effort wide before Collins made a smart save to deny Akrofi his second.

Maldon continued to waste chances of their own as another goal mouth scramble went begging, before Shomari Barnwell and Brian Ifenayi both missed glorious opportunities.

With it all to do in the second half, Brown introduced Charlee Hughes in to action in place of Brown-Bampoe, who's debut only lasted forty-five minutes before being replaced. Whatever was said in the dressing room at the interval seemed to work, as in the 49th minute the Jammers pulled a goal back. Ifeanyi's shot wasn't cleared by the home defence and at the second attempt, Scott Kemp was on hand to scramble the ball home.

Immediately after their first goal, Maldon had a chance for a second, as Hughes was in on goal, but wasn't unable to beat David Hughes in the home goal, who made the save with the use of his feet. The visitors then went close again, as Martins' smart play down the left hand side presented what appeared to be a chance for Kemp, but Barnwell had other ideas and his flicked effort was blocked by a defender. The chances continued to arrive and Hughes could count himself unlucky and three powerful efforts in quick succession were all blocked by Aveley defenders and the Goalkeeper, throwing their bodies on the line to protect their lead.

Just like in the first half, having missed chances at one end, the Maldon defence were then undone at the other end. Aveley sprung the counter-attack one more and Akrofi wriggled his way through the defence and curled an unstoppable effort in to the bottom corner, to restore his sides three goal advantage.

As the Jammers continued to battle, Barnwell reduced the deficit in the 82nd minute, tapping home a cross, come shot from Ifeanyi from close range. In the 86th minute, the hosts had their fifth goal of the night as ex Maldon-man, Makhosini Khanye set up another ex-Jammer, George Skyes who tapped in from close range to make it five-two.

In the dying embers of the game, the Jammers narrowed the gap once again, but it proved to be nothing more than a consolation, as Kemp scored his second goal of the night, following a header back across goal from Barnwell.