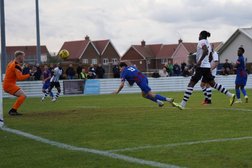 Maldon & Tiptree came from behind to give Tilbury a halloween to forget at Park Drive.

Manager, Wayne Brown was without a number of first team players, with some due to health issues and some injuries. Charlee Hughes returned to the starting XI along with Phillip Brown-Bampoe making his home debut.

The first chance of the afternoon fell to Charlee Hughes who send an effort wide, when perhaps could've tested the Keeper. Like previous weeks, the Jammers then found themselves behind as the visitors went up the other end and scored the first goal of the game. Ted Collins clearance fell to feet of Lewis Smith who arrowed his effort in to the back of the net from inside the centre circle, of Maldon's half.

Jammers' bounced back in quick time, with Malachi Napa smashed the ball home from inside the penalty area after a Maldon corner. Within sixty seconds, Wayne Brown's boys found themselves in front, as a long ball from Martyn Stokes, found the foot of Charlee Hughes who beat the onrushing Keeper to the ball, chipping the ball in to the net, over the helpless Harry Girling.

The home side continued to create chances, with Harry Taylor, Brian Ifeanyi and Malachi Napa all having the opportunity to extend their lead, but were unable to convert. Joe Turpin collected a yellow card in the forty-first minute, conceding a free kick to prevent Tilbury with a goal scoring opportunity, from the resulting free-kick the Dockers found their equaliser. The free kick from the right was delivered to the far post, headed back across goal to an unmarked Roman Campbell, who tapped from home close range.

An entertain match was all square at the break, with the draw a fair reflection on the first half.

Just like last week against Aveley, Brown-Bampoe was replaced at the interval, this time by Bradley McClenaghan. Early in the second half, Ifeanyi appeared to be hacked down inside the penalty area by Luke Wilson, however the Referee waved play on. Moments later, Joe Turpin had a chance of his own to score, but the visiting defence threw bodies in the way to keep the scoreline level. Moments later and just eleven minutes in to the second half, the Jammers took the lead for the second time in the match. A bullet header from Martyn Stokes was expertly saved by Girling, but Stokes reacted the quickest and his powerful cross rebounded off Malachi Napa and flew in to the net, for Napa's second of the game.

Wilson was booked after conceding a foul from a Tilbury set piece and moments later, was lucky to stay on the pitch. As Ifeanyi danced his way towards goal, Wilson pushed him to the floor, clearing denying a goal scoring opportunity and whilst the Referee awarded the free kick, he decided against handing Wilson a second yellow card and a red. In the 70th minute, the visitors were reduced to ten men, as Napa broke through the defence and ran towards goal, he was scissored to the floor by visiting Captain, Lee Noble who was shown a straight red card for denying a goal scoring opportunity.

With nine minutes left on the clock, the Jammers scored their fourth goal of the afternoon, with what was probably the best goal of the contest. Hughes won the ball back and kickstarted a counter attack, Napa dribbled at the defence before spreading the ball out wide to Taylor. Taylor delivered a superb cross in to a dangerous area and Hughes, having started the attack, arrived with a superb diving header, powering the ball in to the net for his second goal. As the clocked ticked towards the last seconds, Hughes had the ball in the net once more, however was denied his hat-trick for an apparent "foul".