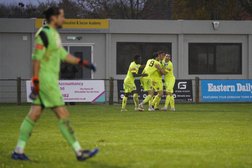 The Jammers travelled back to Norfolk with just a point, having led three-nil in the fifty second minute.

Maldon & Tiptree travelled to Norfolk without the injured Malachi Napa, whilst Captain Martyn Stokes was only fit enough for the subs bench, where he was joined by new signing Courtney Justin.

On a wet and windy afternoon, with the grass extremely long, the Jammers surprisingly were able to get the ball down and play their normal style of attractive football. After six minutes, Brown’s side had their first goal of the afternoon. A short and quick corner caught Dereham by surprise, Sam Cornish delivered an inviting cross to the back post, on to the head of Frankie Terry, who headed home from close range.

Spurred on by their positive start, the Jammers continued to create chance after chance with the home side unable to cope. The hosts had appeals for a penalty waved away, which resulted in their manager being shown a straight red card and their assistant manager shown a yellow card. Bryan Ifeanyi, Charlee Hughes and Scott Kemp all had chances to extend the Jammers lead, but were unable to find a way past Pride in the home goal.

In the 26th minute, Ifeanyi was through on goal, took the ball around Pride who had no choice but to bring him down inside the penalty area, with the Referee correctly awarding a penalty kick. Ifeanyi picked himself up off the floor and dispatched an accurate penalty in to the top corner for two nil.

Shortly after, Ifeanyi had a chance for a second, but decided against shooting, instead he looked for Scott Kemp, but a defender got back in time to deny what would have been a certain third goal. Before the break, there was time for both Sam Cornish and Joe Turpin to collect yellow yards in separate incidents, with surprisingly the home side escaping further cautions.

After a positive first half, Maldon started the second half how they dominated the first and had a third goal inside the opening ten minutes. Al-Amin Kazeem intercepted the ball on the left hand side of the pitch, skipped past three defenders and delivered an inch perfect cross on to the head of Bradley McClenaghan who headed home from close range. Game over?

The hosts who could’ve thought at that point that they were dead and buried continued to push forward and were fortunate to find a way back in to the game in the 57th minute. As Ted Collins left his goal line to claim the ball, he was on the receiving end of a two-footed sliding challenge despite having the ball safely in both hands, the ball fell kindly to David Hinton who was allowed to curl the ball home in to an empty net by the Referee.

Looking to break the home sides momentum, Brown replaced Shomari Barnwell with Courtney Justin, for his Jammers debut, which unfortunately got off to the worst possible start. As Dereham broke down the left hand side, Justin was found out of position and made a rash tackle in an attempts to recovery, giving the Referee no option but to award a spot kick for the home side. Adam Hipperson stepped up and placed his effort beyond Collins.

With the home side now in ascendency, the Jammers defence was in the middle of a rough spell and the hosts completed their come back in the 67th minute, for their third goal in ten minutes. Hipperson was allowed to cut in from the left flank by Justin and unleashed a rocket towards goal, which Collins was unable to stop as it flew in to the back of the net – three all with 25 minutes to go.

As the game was set up for a possible frantic finish, Martyn Stokes was introduced in place of Ifeanyi in a slight change of shape for the Jammers. As Maldon looked to bounce back from their rough ten minutes, they continued to create chances, with Pride making a smart save to deny Hughes.

With just under ten minutes to go, Phillip Brown-Bampoe was introduced in place of Justin who had a debut to forget. With the Jammers looking solid in defence once more, it was they who had the best chance to win the game in the last few minutes, as Scott Kemp watched on as his header looped in to the hands of the grateful, Pride in goal.