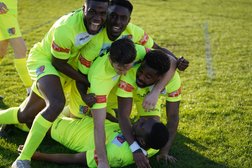 Maldon & Tiptree produced a second half fightback away at Tilbury to seal all three points.

For the first time in a long time, interim-Manager, Paul Abrahams was able to name five substitutes on his Jammers bench, as the squad returns to full-fitness ahead of the final games of the season. Chaynie Burgin, Harmeed Ishola and Martyn Stokes remained absent through injury, whilst Rob Lacey and George Winn both missed out on being in the match day sixteen.

It was the Jammers who started the brighter and had the first real opening of the game, inside the opening exchanges. Olumide Olutwatimilehin broke down the right hand side and found himself in acres of space, however his powerful cross-cum-shot evaded Scott Kemp at the far post, with the ball sailing away for a goal kick. Oluwatimilehin was proving hot to handle, for the home defence and created another opportunity shortly after and his dangerous cross in to the box bounced around in the box, before striking Ade Cole and narrowly going over the bar.

Up the other end, the hosts looked dangerous on occasions with Roman Campbell and ex-Jammers striker, Brian Moses providing a tough test for the Maldon defence. In the 28th minute, Moses returned to haunt his old side. As the ball fell kindly to the big-man inside the penalty area, he took one touch before blasting the ball beyond Tommy Dixon-Hodge to give the Dockers the lead.

Ahead of the interval, Maldon made attempts to get themselves back in the game without seriously testing Lamar Johnson in the home net. Cole created the best opportunity, however his cross took a deflection and narrowly evaded Scott Kemp, at the far post. On the stroke of the break, the Jammers had appeals for a penalty turned down, as it appeared Al-Amin Kazeem was fouled having entered the box, however the Referee disagreed.

After a mixed first half, with just perhaps the final pass missing, Maldon started the second half in command and soon had an equaliser. After regaining possession high up the field, Ade Cole produced a pin-point through ball, in to path of Oluwatimilehin who made no mistake, curling his composed strike beyond Johnson to draw his side level within five minutes of the break. Following the goal and in what appeared to be a slight change of approach from Abrahams, Scott Kemp was replaced by Shomari Barnwell, which was closely followed by Malachi Napa making his long-awaited return from injury, replacing the goalscorer, Oluwatimilehin.

The tactical change from Abrahams had the desired effect. With Napa finding pockets of space and Barnwell giving the defenders something to worry about, Lordon Akolbire broke well down the right-flank. The attacking-full back broke in to penalty area, with the ball eventually being cut back to Ade Cole on the edge of the box, who made no mistake, unleashing a powerful effort in to the bottom corner, beyond Johnson who was left stranded. After being behind at the break, the Jammers had deservedly got themselves in front after just twenty five minutes in the second half, with Cole's fourth goal in as many league games, adding to his assist for the first goal.

As Tilbury scrambled for an equaliser, they created a number of half chances without really testing Dixon-Hodge in the Maldon goal and perhaps lacked the final bit of quality in the final third, which on another could have hurt the Jammers. Tilbury's best opportunity was in the 87th minute, as Jordan Peart broke down the left, however his cross in to a dangerous area was met by a Maldon defender who superbly cleared the danger.