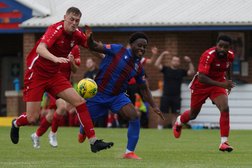 There will be no FA Cup heroics for the Jammers this season, after a 1-0 defeat against Aveley.

After last weeks win over Romford, Wayne Brown made one change to his starting XI, with Makhosini Khanye introduced from the start in place of youngster, Lordon Akolbire. Martyn Stokes and Kojo Awotwi were still unavailable for selection. Aveley arrived at Park Drive off the back of a 1-1 draw against AFC Sudbury on the opening day of the season.

There was to be no repeat of last weeks electric start, as the Aveley started on the front foot. The Jammers tried to build momentum, however the visitors were pressing with intensity and preventing Wayne's side from creating any chances. Aveley created and won a number of set pieces, however were unable to find a way past the home defence.

Fifteen minutes in to the match and we had our first talking point. Brian Ifeanyi was in on goal and appeared to be tackled from behind by the last defender, in George Allen who must have feared the worst. However, the Referee didn't see the tackle as a foul, to the amazement of everyone in the ground and waved play on, without awarding a foul. After some sloppy play from the Jammers, Bradley McClenaghan collected a yellow card to prevent a potentially, dangerous counter attack, who was then walking a tight rope.

As half-time approached, John Gilbert had two chances for the Jammers, however his first headed effort went over, before sending a curling effort wide of the near post. After further sloppy passing from the Maldon midfield, Aveley were gifted with a great opportunity on the stroke of half-time and despite a number of tackles, Alex Akrofi broke free and bent a delightful effort in to the top corner, beyond Ben McNamara to hand the visitors the lead in the 45th minute.

With their lead in hand, Aveley appeared to be prepared to manage the game in the second half and were looking to spring a counter attack at every opportunity. With the words of Brown ringing in their ears, the Jammers continued to push for an equaliser but were up against a strong Aveley defence. Malachi Napa had a chance from a direct free-kick, from just outside the box however his attempt couldn't get beyond the Aveley wall.

As 308 spectators were in attendance, Maldon were desperate to repeat their cup exploits of the last two seasons, but struggles to find an equaliser. McNamara was on hand to keep his side in the game with twenty minutes to go, as he denied Akrofi a second goal with a smart save. Shortly after, Shomari Barnwell made his comeback from injury and replaced Laste Dombaxe as Wayne Brown changed his sides formation.

Heading in to the 90th minute, Barnwell managed to link up with Charlee Hughes, who presented Barnwell with a glorious chance to equalise, but his volley was smartly saved by Hughes in the visiting goal. Ifeanyi continued to try his best and appeared to be fouled inside the box, however the Referee disagreed once more and award the home side with a free kick on the very edge of the box. With what was to be virtually the last kick of the game, Khanye whipped his free kick over the bar, however Aveley's shotstopper, Hughes was equal to it and safely held on to the ball, to dump the Jammers out of the competition.