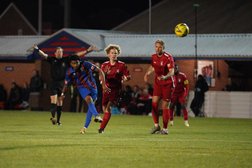 Charlee Hughes and Malachi both scored for the second home game in a row, ensuring the Jammers progressed to the second round of the Velocity Trophy.

Fresh from a clean sheet and two consecutive wins, Maldon started on the front foot against a Aveley side in their first game under new manager, Danny Scopes. The Jammers didn't have to wait to long to open the scoring, as in the eleventh minute, striker Charlee Hughes scored his fourth goal in three games, scoring in his third consecutive match. Al-Amin Kazeem did superbly down the left hand side, delivering a venimous ball in to the box. Hughes ran across his marker, to the front post and flicked his header in to the back of the net, via the far post to hand his side the lead.

Five minutes later and the Jammers had their second goal, leaving the visitors shellshocked. Malachi Napa dribbled at the defence, rode two challenges as the Referee played advantage, Napa's first effort was blocked however the ball fell kindly back to him and he unleashed a goal of the season contender, as his effort flew in to the top corner, past the helpless David Hughes from 25 yards.

Playing with new found confidence, Brown's side continued to create chances and should have extended their lead. Brian Ifenayi was guilty of wasting a great chance, as he broke through the defence with fancy footwork, he only had Hughes to beat, but he blasted his effort in to the side netting. Aaron Williams-Bushell was next to pass on an opportunity as he found space in the penalty area, before blasting over. At the other end, Ted Collins was called in to action to deny ex Jammer, George Sykes but Collins stood tall and made a smart save from close range.

At the end of a half where the Jammers had dominated, Aveley were lucky to keep eleven men on the pitch as Harry Donovan escaped a red card after a high foot, which caught Napa. The Referee awarded Donovan the benefit of the doubt and handed him a yellow card.

Aveley came out in the second half with their new managers thoughts ringing in their ears and started brightly, whilst the Jammers struggled to find their momentum from the first half. Hughes had appeals for a penalty turned down and was harshly booked for simulation, whilst his constanting pressing from the front resulted in a number of turnovers, with the visitors struggling to cope under pressure.

Hughes in the visiting goal was on hand to deny Ifeanyi, whilst debutant, Terry, nephew of John, watched on as his left footed effort went just wide of the far post. With Aveley pressing for a goal back, the Jammers were superb in defence with stand in captain, Joe Turpin and Terry at the heart of the defence. Collins was once again called in to action, as he made a fantastic diving save to keep his clean sheet in tact.

Aveley continued to pump balls in to the penalty area, but Maldon maintained their resolute mentality and managed the game to the final whistle, picking up their first win over Aveley at the third attempt this season and their second clean sheet in as many games.