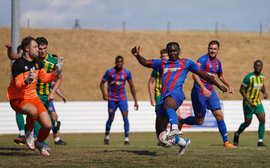 First Win of The Season

At the third attempt, the Jammers collected their first win of the season, with a two-nil victory in the Emirates FA Cup.

After two consecutive two-nil defeats to start the season, Paul Abrahams was without Laste Dombaxe through suspension, Scott Kemp due to Covid and Bradley McClenaghan due to personal commitments. Abrahams made several changes to Tuesday's starting XI, with Kacy Parish and Sam Coombes both handed spots in the starting eleven, whilst Ethan Abrahams took his place on the bench for the Jammers.

Following a slightly nervous start, Maldon were almost behind inside five minutes. Harpenden started brightly and won a corner kick which almost brought the game's first goal. A delicious effort from the right was powerfully headed against the cross bar, with the rebound falling kindly to the defence. A few moments later, Brad Ihvionvien won a free kick in a dangerous area, unstepped youngster, Harvey Sayer. With his wand of a left foot, Sayer sent his curling effort around the wall and in to the bottom of the ket, beyond the rooted Goalkeeper.

With the gaming swinging from one end to the other, both teams had chances and at either end, the Goalkeepers were called upon to make important saves, First up was Tom Middlehurst who made a superb diving save, before Dylan Logan was denied at the other end by Harpenden's shot stopper. The visitors continued to push for an equaliser and had of been more clinical in dangerous areas, they probably would've found one and from a quick counter attack, were denied by a last ditch sliding tackle from the returning Martyn Stokes, who's perfectly timed interception kept his side in command.

As 33 minutes clicked on to the Referee's watch, the Jammers scored their second. A set piece from the right found it's way to Kamani McFarlane at the far post who reacted quickest, to swivel and turn the ball home for his first goal of the season.

The visitors would've been disappointed at the break having wasted some key chances in the first half and started the second half on the front foot. During the early exchanges, Middlehurst was called upon once again and made a fantastic diving save, down low to his left side to deny a certain goal. In response, the Jammers went close to a third with McFarlane hitting the side netting and Ihionvien unleashing a powerful effort which rebounded off the frame of the goal.

In what was a scrappy and frantic second half, neither side was able to maintain possession and stamp their control on proceedings. As they pushed to find a way back in to the game, Harpenden were once wasteful in front of goal as they couldn't find a way beyond Middlehurst who made a superb diving save, showing the supporters in attendance his impressive reactions. With sixteen minutes on the clock, Dylan Logan was replaced by George Forrest.

As the game drifted towards the final whistle, there was a proud moment for Manager Abrahams, who introduced his son Ethan Abrahams in place of McFarlane, with Ethan making his first every appearance for the Jammers. In the closing stages, the Harps were unable to breach the home defence which was superbly marshalled by the returning Martyn Stokes but the hosts also had Middlehurst to thank for ensuring they booked their place in the First Qualifying Round of the competition.