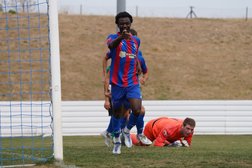 Maldon & Tiptree sprung another FA Cup upset, dumping Haringey Borough out of the competition, booking their place in the 2nd Qualifying Round.

First Manager, Paul Abrahams was looking for a response from his side after Monday's defeat against Heybridge Swifts and made several changes to his starting XI. Laste Dombaxe returned following suspension, whilst Scott Kemp and Kamani McFarlane also returned to the starting XI.

During a nervy opening exchange, the visitors almost had the chance to take the lead, but Lance Akins produced a superb tackle to deny what looked like a certain goal. Inside the first ten minutes, the Jammers started to imprint their stamp on the contest and could have taken the lead through Sami Bassadi who's effort sailed over the bar before a block from a defender prevented Kemp from tapping home.

In the 13th minute, Maldon were rewarded for their bright start. Brad McClenaghan found Harvey Sayer in a position which allowed him to drive at the defence, Sayer spotted Kamani McFarlane to his right and released him on goal immediately. McFarlane took one touch and sent a driven effort across the goal and in to the bottom corner. 10 minutes later, the visitors were gifted an equaliser - as the Jammers conceded possession, Haringey broke forward and the ball fell to Georgios Aresti who's effort struck the back of Joe Turpin, wrong footed Tom Middlehurst before rolling in to the back of the net.

With the game flowing from one end to the other, the Jammers looked the most dangerous in attack. McClenaghan went close with an effort from the edge of the box, before Kemp shooting over with his left foot. McFarlane then thought he had a tap in, but a Borough defender was hand to intercept the danger. Kemp then appeared to put the ball on a plate for Akins, but the ball drifted over the tall central defender. On the stroke of the interval, Martyn Stokes twice went close with the headers, with the second forcing a superb save Luke Mewitt in the Haringey goal.

Having felt like they probably should have been ahead at the break, the Jammers started the second half well as Sami Bassadi had a chance to regain his side the lead, but Mewitt made the save. In side the first fifteen minutes of the second period, the Jammers were dealt a blow with Martyn Stokes suffering what appeared to be a serious knee injury and was unable to continue, being replaced by Brad Ihionvien.

Compared to the first half, both teams were struggling to produce goal scoring opportunities and continued to cancel each other out in defence vs attack. Akins was caught in possession, deep inside his own half and conceded a free kick, with a yellow card handed out at the same time, however the visitors were unable to capitalise on their set piece. With just under twenty minutes remaining, Dylan Logan was introduced to the contest, replacing Sami Bassadi who's first Jammers start lasted seventy minutes.

In his first time since returning from suspension, Laste Dombaxe was producing one of his trademark performances and also provided an assist with some battling midfield play and a clever pass, but Ihionvien sent his effort narrowly wide. In the closing stages, it appeared Haringey were prepared to settle for a Tuesday night reply, whilst the Jammers pushed for a winner but were unable to capitalise on a number of set pieces, whether that be corner kicks or throw-ins.

But, in stoppage time, the Jammers found their deserved winner. As Haringey lost possession inside the Maldon half, the Jammers counter-attacked to once again dump Borough out of the competition in stoppage time. McClenaghan provided an acute through ball in to the path of McFarlane who broke down the left hand side, with Mewitt rushing to his feet, McFarlane didn't panic and calmly slotted the ball under the shot-stopper's body and in to the back of the net to book his side's spot in the Second Qualifying Round.