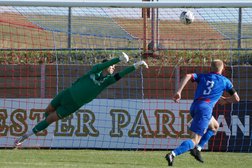 The Jammers hopes of a long FA Cup Run came to the end on Saturday afternoon, at the hands of Hornchurch.

Maldon come into this game in poor form after a 3-0 loss to Ware FC in midweek. Before kick off, a minutes silence was held in memory of Queen Elizabeth II which was respected by both sets of fans.

Soon after kick off, Higgins intercepted a poor Maldon pass on the half way line and sent a shot towards goal from over 40 yards, with the ball flying over Tom Middlehurst’s head and into the back of the net. 1-0 Hornchurch. In the 8th minute, Higgins almost had his second, with his effort from the edge of the box producing a wonder save from Middlehurst, flicking it away from his top corner. Only a minute later, the ball was once given away again high in the Jammers half and Higgins sends the ball over the keepers head again from long range with his opposite foot.

However, the action wasn’t all towards the Jammers goal. Kamani McFarlane made a great run towards the Urchins goal, unleasing down the wing Sayerwho delivered a dangerous cross which was then blocked by a defender and sent behind for a corner. In the 16th minute, Hornchurch won a free kick on the edge of the Maldon box, the shot was sent towards goal but Middlehurst produced a good save. Heading the other way, the Jammers produced their best chance of the game when Sayer took a great touch from a long-range cross, beat a group of Urchins defenders and unleashing a shot towards goal but a defender reacted quickly and managed to put in a much needed block.

Towards the end of the half, Maldon had a free kick of their own which was delivered into the Hornchurch box by Sayer and Bradley Ihionvien only narrowly missed the goal with his effort.

Maldon kicks off for the second half with plenty of work to do. Soon after, Lewwis Spence was shown a yellow card for denying the Jammers in a dangerous position but Harvey Sayer takes was only able to hit the wall with his free kick. Maldon were in control of the ball, passing it around the back before being forced to head the ball back to Middlehurst who is forced to beat the Urchins attacker to the ball. Mid way through the second half, Dombaxe was cautioned for hauling a Hornchurch midfielder to the floor.

The Jammers were continuine to huff and puff in order to find a way back in to the contest and the next chance fell to Dombaxe, who sent a slow shot towards the goalkeeper from the edge of the box which was easily gathered. Up the other end, ex-Jammer Liam Nash went close forcing Middlehurst win to a superb diving save, as he tipped the dangermans effort on to the frame of the goal.

Things then went from bad to wore for the Jammers, as Laste Dombaxe was fouled on the halfway line, only for the Referee to book him for handball and subsequently showed him a second yellow card. In the 41st minute, Hornchurch Ola Ogunwamide sent two shots towards goal both were blocked by Turpin and Forrest respectively. Seconds before the final whistle, the ball comes into the Jammers box and the visitors claimed their third through the foot of Liam Nash, who scored on his return to Park Drive having been left unmarked at the far post. Nash made no mistake, converting his opportunity with a left footed volley.