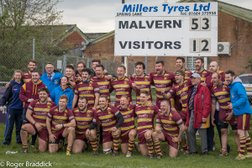 Yes we are nearly in the land of great joy and happiness. 6.45pm next Tuesday and Thursday sees the start of pre-season training.

As we move toward the 2019-2020 season we do so with great optimism. The 1st team return to Midlands Two West(South). In addition they are in the North Midlands Plate Competition and we have this season entered the RFU Knock-Out Competition, this starts at regional, then national level culminating in the final at Twickenham at the end of the season.

The second team after a few years of great rugby but lacking in structure have been entered in The Midlands Reserve League Division 3. The first half of the season being against local teams, the second split into a North Midlands wide based on position after the first half.

The third team will again will be "Strictly Social" under the captaincy of Chairman John Holden, who as well as managing week by week to sell the myriad of benefits playing for the 3rds has to health and well being, is hopeful of a return to full fitness himself for the 3rds.

The Colts have been a huge success over recent seasons and we look again for them to be the conveyor belt that has seen so many players move from our excellent Youth Section into 1st, 2nd and 3rd Team rugby.

Rob Cook Director of Rugby said, "We are looking forward to a strong season at all levels. The basis of a strong squad has always been there, we have a couple of quality players returning from studies at university, colts from last season now into adult rugby and a number of players returning from long term injuries. I am very optimistic about the season before us."

He went on to say "Pre-season will go a long way to define the whole season, if we can get our fitness up to a high level we will start the season well. Early season momentum will be what we looking for in all the competitions. We blooded lots of players last season and there is a real opportunity for many to make the break through this season for the long term. I want the 1st and 2nd teams to both be successful this season and I hope as many as possible will get to pre-season to ensure that they are in contention." " We look forward to welcoming new players to the area or those stepping up or down a level from their current club, all are welcome and will enjoy the brand of rugby we play".