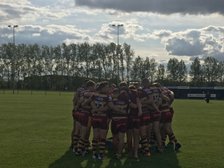 Malvern travelled to the north of Shropshire to play in the quarter finals of the North Midlands Shield. This was the first competitive run out of the season on a day where both the weather conditions and wide open spaces of Shrewsbury's pitch perfectly suited the style and pace of the Malvern game.

A quick start saw Malvern immediately into the Shrewsbury half and a failure to release by the defence saw full-back Dan Batty open the scoring with a straightforward penalty in front of the posts.

From the kick-off the ball was quickly recycled between forwards and backs, seeing a good finish from Connor Giggle in the corner, Batty converted.

Shrewsbury responded with a penalty for not releasing under the Malvern posts.

Malvern's response set the tone for the rest of the afternoon. Quick hands saw Malvern stopped illegally 15 metres out and a quick penalty from the lively scrum half Laurie Essenhigh put No8 Jack Curtis through for a score under the posts. Batty converted.

Next up was a kick through from Malvern which Giggle gathered and did well once rolled on his back to dab down for a try.

Again straight from the kick off forwards drove forward and release backs, Cook back inside to Essenhigh who scampered through from the 22 to score in the corner.

Some top quality defence dislodged the ball from a Shrewsbury attack, quick hands saw John Wills through for a one on one against the Shrewsbury full back who he stood up and then put down with his skilful running line to score under the post.

The second half started with some real determined play by Shrewsbury who were repelled again and again. Finally after an infringement Shrewsbury went for their most potent weapon, the scrum on five metres. The next 15 minutes and 12 scrums later, Shrewsbury could count themselves very unlucky not to score. Finally Malvern got possession of the ball, a bullocking run from the dominant and influential Josh Herbert saw him stopped just before the line and Ieuan Mustow a powerhouse in midfield scored under the posts, Batty converted.

Malvern had rung the changes now with run outs for Friths, Landan and Bill.

From the kick off another quick movement of the ball put Wills in for a second try, which Batty converted.

Ever dogged Shrewsbury scored a well worked try off first phase which they converted.

Next up was hat-trick try for Essenhigh, who took a quick five metre penalty while the defence was napping to score.

Mustow finished the try fest gathering a Dan Batty kick through to out pace the defence and score under the posts for Batty to convert.

There were some outstanding performances across the board. Mark Chivers and Eddie Edwards at prop stood up against a much heavier set of props and whilst under pressure at scrum time, line-outs were a thing of beauty. A mention for Josh Herbert who was the pick of a very busy back-row, Dan Batty's kicking out of hand and on conversion and penalty kicks was very impressive.

Final mention to Laurie "chuck out my gumshield in a fit of pique" Essenhigh aged 9 1/2. He kept pace and tempo in the game, as all good scrum-halves do, he constantly chatted to the opposition forwards and equally important when they took offence he got behind his forwards and hid. Ever on the shoulder of the break away runner, a man of the match performance.

Next up is Pinley at home in the league, where we hope a bumper crowd will be present. Please remembers non-playing members get in to watch for free if their subs are up to date.