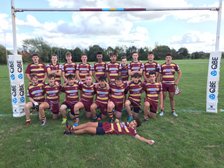 Malvern Colts were overwhelmed by a superior Old Halesonians side in their first league match of the season at Spring Lane. Our nemesis team from last year look like being real challengers for the Division 2 title with a display of power, pace and physicality that the 2019/20 version of our Colts found it difficult to live with.
Malvern held their own in the first period, with two tries from skipper Bajwa matching Hales to make it 10-10 at half-time. In the second period, however, Hales turned up the gas and ran in five more tries for 31 more unanswered points. Malvern were frequently architects of their own downfall, giving away too many turnovers at the breakdown and losing focus and control, but that is to take nothing away from Hales who were strong up front and well organised at the back allowing them to apply serious pressure and take full advantage of the Malvern errors and inexperience.
Colts rugby is a significant physical step-up from age-grade play, and our young side will have learned a lot from this experience. Malvern now travel away to Kings Norton on Sunday 15th looking to bounce back from this defeat.
Share via
FacebookTwitter
https://www.pitchero.com/clubs
Recent news