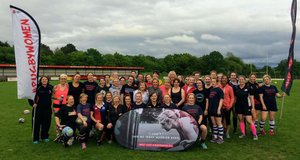 The season may be over, but we've been busy!

At the End of Season Club Dinner, we reviewed our improvements this season, having again improved our league position this season in Women's Championship North 2, and, as the third highest scorers in the league, finished with a positive points difference.
Ladies Captain Suzi Hobday and Vice-Captain Hattie Gaunt (also top try scorer) thanked James Armstrong in particular for his much appreciated efforts this season as Ladies Head Coach.
Awards were also received by Charlotte Gillis as the Coach's Player of the Year and Amber Smith as the Players Player of the Year.

On the 16th May, we held our first Inner Warrior event - an RFU backed campaign to get more women and girls playing rugby. A variety of events were organised by members of the ladies committee for the evening, including an inflatable assault course, BBQ, prosecco, goody bags and an intro to basic rugby skills and drills. We had a huge turnout of 69 women and girls - 26 of those completely new to rugby! We hope to see many of those who attended join us for our 2017-18 season.

May bank holiday saw us enjoy our annual weekend away at Bournemouth 7's Festival. Although we didn't bring back a trophy, it was a fantastic weekend of team bonding, sun and beers...!

Pre season training resumed on Tuesday 4th July, with a large turnout and many new faces!
We will be training every Tuesday @ 7pm, and ladies of all ages, ability and experience are welcomed to join us!