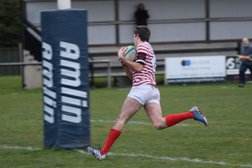 Another solid all round team performance got the new year off to a great start with an impressive 5 try win against title rivals Rochdale.

Manchester seemed up for this crucial match right from the outset and all the early pressure was on Rochdale who never got out of their own half in the first twenty minutes.

A clean break in the centre by Sam Powell saw him kick ahead, although blocked by a Rochdale player this seemed to be missed by the referee and to Manchester’s dismay he instead awarded a penalty to Rochdale at the next breakdown.

Undaunted Manchester were soon back in the Rochdale 22 with an attacking scrum; from this the ball was moved to the right where Doug Day broke the defensive line and fed Charlie Ding in for the first try, converted by Freeman, 7v0.

Despite constant pressure from Manchester, the Rochdale defence was solid for the next ten minutes. As the referee penalised Manchester at a line out, something was clearly said, with Manchester marched ten yards backward and Karl Higginson given a yellow card.

The numerical advantage allowed Rochdale to finally exert some pressure in the Manchester half and from a scrum they moved the ball well to the right, creating space for the winger who hacked through and scored wide out, conversion missed 7v5.

Manchester managed to weather the rest of the sin bin time and once restored to 15 got back to playing in the Rochdale half. Good line speed and determined tackling from the back row kept the pressure on Rochdale and the ball in their half.

As Manchester looked to move the ball out wide to their right a Rochdale player was guilty of a deliberate knock on, which earned him10 minutes in the bin, Freeman converted the resultant penalty 10v5.

Following the restart, Manchester earned a line out, at which the Rochdale no 4 was guilty of taking out the jumper, dangerous play and a second Rochdale player in the bin.

With Rochdale down to 13, Manchester took advantage of the situation, scoring a try either side of half time. The first, a line out drive giving the backs good possession and James Graham making a clean break as he came into the line. The second came from a solid scrum in the Rochdale 22, with Freeman darting over under the posts, both tries converted saw Manchester take a commanding 24v5 lead early in the second half.

Restored to 15 it was Rochdale’s turn to exert pressure on Manchester and look to get back in the game. A series of drives in the Manchester 22 finally breached the defence with a try wide out on the right, conversion missed 24v10.

As Manchester fluffed the re-start Rochdale were once again able to keep play deep in the opposition 22. A determined defensive display from the Manchester pack saw them repel several attacks and turn the ball over repeatedly, only for the pressure to be re- exerted as mistakes were made as players were too hasty to move the ball on after making good ground, rather than resetting.

As the crowd called for cooler heads to take control and kick for territory Manchester gained a penalty at the scrum, the kick to touch finally got the ball in the Rochdale half.

Rochdale looked to clear their lines but a poor kick ahead went directly to James Graham wide on the left, just inside the Manchester half, he passed to Ollie Dickinson who beat his man and returned the pass, which allowed James a clear run in under the posts, conversion made 31v10.

Manchester kept the pressure on with good line speed and solid tackling not allowing Rochdale to break out. A series of penalties to Manchester kept play in the Rochdale 22. A further yellow card was issued to a Rochdale player for hands in the ruck in the danger area.

As the final whistle approached a Manchester player got a hand on a clearance kick from Rochdale, the ball fell to Harry Lewis who fed Freeman for the final try, conversion missed final score 36v5.

There was much to be admired from this solid bonus point win, good line speed in defence, a solid set piece display, tremendous tackling with Charlie Ding leading the way and good back play, with James Graham to the fore.