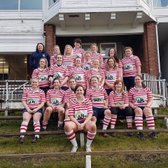 Manchester were looking to record their first home victory following two convincing away wins. Once again the Manchester pack was considerably lighter in weight than the opposition and this was to prove a great leveller in the second half.
The game kicked off on a perfect day for rugby on an excellent playing surface in the Stadium.

The Visitors recorded the first score with an unconverted try to take a 0-5 lead. Manchester began to apply relentless pressure on the Preston defence with a series of offloads and domination of the rucks and contact areas.

This pressure resulted in four excellent tries ( all unconverted ) after some outstanding handling and elusive running by Hattie Gaunt (1) Kate Bailey (1) and Jane Duggan (2) to take the half time score to 20-5 to Manchester.

Manchester continued to move the ball at every opportunity at the start of the second half, against an improving Preston side. A fine try ( unconverted ) was scored by Emily Smith to increase the home sides lead to 25-5.

Unfortunately Manchester were once again forced to make changes following injuries to the very influential Hannah Johnson ( centre ) and Laura Dudbridge ( No 8 ) at a very critical stage in the second half.

Preston capitalised on the enforced changes to the Manchester side and after a sustained attack on the home sides line , were awarded a penalty try ( converted ) to take the score to 25-12
The final score in a very competitive hard fought game was 25-12 to Manchester.

All the players on the park contributed to a very entertaining match.
The Manchester coach was absolutely delighted with the commitment and overall performance of the whole team, against a very good Preston side.