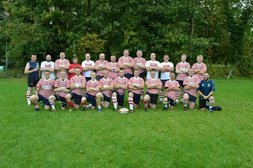 In contrast to recent weekends it was good to see a number of regulars return from injury to ensure we had a full squad, with subs, as well as providing the 2nds with two late replacements.

A hard game was expected against a side we have played for 3 years without a win.

In a welcomed reversal of events it was Ashton that were short of numbers at the outset fielding only 14 players. The early action was contained within the Ashton half and following some short drives from the forwards the ball was spun out to the right wing where Ryan Eddison made the extra man count, running round the opposition to score under the post, the kick was converted.

Following this, ill-discipline from Manchester resulted in a series of penalties, which helped Ashton keep the play in the Manchester half. A deep clearance kick by Manchester was returned by the Ashton full back, indecision from Manchester allowed the ball to bounce, this was then hacked through and with no cover, Ashton scored a try under the post, this was converted, 7v7. From the kick off, further penalties were conceded by Manchester, the final one being under the posts and this gift was gleefully accepted by Ashton who took the lead 10v7.

In the dying ,minutes of the first half Manchester finally put some phases of play together moving the ball in a more controlled manner from side to side, with an overlap created on the right hand side, Ryan once again scored a try, the conversion was missed, 12v7 to Manchester at half time.

Fresh legs were brought on in the second half and it was agreed to slow the game down, play the patterns and more importantly cut out the mistakes that were keeping Ashton in the game. Straight from the kick off the pattern of the second half was established with the forwards driving the ball in from either side of the fly half, from the breaks the backs could then use the extra man to good effect. Within short measure, 3 tries were scored and converted, the game was now convertible at 33v10.

Ashton were by now well and truly demoralised, injuries to 3 of their players meant that the game could only continue with assistance from Manchester who provided 3 players to help. However, this did not provide any respite and Manchester once again scored their 6th and final try. It was agreed following this score with further Ashton players injured that by mutual agreement the game was stopped. Not quite sure how the score got to 39 but it was near enough and an emphatic win all the same.

It was good to see the numbers available back above twenty but a big shout out to those who have supported the team over the past weeks when numbers have been short.