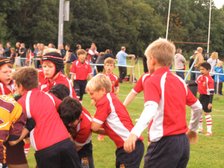 The Tigers came determined to overturn their Lancashire Cup defeat, but it was not to be as Manchester matched their physicality at the breakdown area

We always look forward to our matches with Sedgley as they come with the same determination as we do...to have a good game of rugby, to develop their players skills and understanding and to also have fun at the same time. Today's fixture was no exception and both sides came away with a sense of team spirit and pride in their commitment to the game of rugby.

With Will captaining the Tigers and winning the toss, it was time for Josh to motivate his players for a determined start and to organise them for the kick off. He spread his players and filled the gaps, the whistle blew and the game was on!

What a first half we saw from both teams eager to taste victory. Manchester, playing with the slope, passed the ball freely through the back line, exposing the Tigers weaknesses out wide. But with Charlotte once more in the Tigers side, she was swift enough to slow down our wingers for her forwards to make their impact at the breakdown. Time after time Manchester drove forward only to loose the ball at the ruck. The Tigers gained turnover after turnover as the Manchester forwards looked on bewildered and bereft. It was only the Tigers obvious flaunting of off side and coming in from the side that kept conceding the ball back to Manchester. With Josh passing sublimely all day, it was the Tigers who found themselves on the back foot throughout the early exchanges, always playing catch up and chasing the game even with their scrummaging superiority. With the ball reaching the wings again and again, Manchester went over twice in the first half and calmness descended on the side, if only momentarily. A fumble in midfield by Manchester led to turnover ball and Charlotte was off. With 3 players to beat the advantage seemed to be Manchester's, but she brushed them aside on her way to the whitewash and the Tigers were back into the game as the half time whistle blew.

Joe made way for Bill in the forwards and Fin came on at scrum half whilst hanuf took a breather. The second half was again a tense affair with both teams upping the ante after their respective coaches half time input. Much of the second period was played close to the ruck with the Tigers relying on smashing through the Manchester defence. Sadly this did not materialise and when the ball went out wide, first to James and then to Tom Mac, the inevitable happened with Manchester increasing their advantage to finish the match 4 tries to 1 to the good.

For this game, Hanuf was back at scrum half with Fin going out onto the wing in place of Louis, whilst Joe came back into the 2nd row and Bill took a 1st half break. Game 2 was a harder match for both sides as both sets of players were tired from Game 1 exertions. The game became more open as it wore on and Manchester took the advantage of this by continually passing the ball out wide to strip the Tigers defence.

In this match, the Tigers relied on their kicking game to keep Manchester at bay, but with the pace of both Toms at fullback and wing, it was a plan doomed to fail. Once the ball was fielded from the kicks, the Manchester backs reformed their line so smoothly, with each player trusting their teammates to be their so were confident in their offloads and the ball went wide time and time again. On one occasion with our world renowned 'Outside Centre' (OC) Prop, Myles, there to take the pass and power over for his first try of the day.

Through the match, the Tigers remained resolute and their heads did not drop. They again scored the last try of the first half and went in at the break still in contact on the score board, 21v7. It was only the tiredness of the final quarter that saw the Manchester team extending their lead with a further 3 tries in the second half to finish the match 42v7.

Both matches were played in the spirit of the game, with any ill discipline being addressed by the respective coaches with the players concerned. Another fine day of rugby and we look forward to seeing the Tigers next season for more exciting rugby.

Next week finds us travelling away to play Marple for the first ever fixture against them. As usual it is a 10 am arrive time with kick off scheduled for 11am. Please plan to be there on time and ready to face the unknown!!!