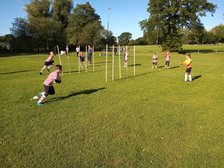 After our home encounter against Heaton Moor on, 9th December, the Manchester players had a lot to do to make up for the whitewash that Heaton Moor inflicted.

The first game saw Manchester really stepping up the pressure right from the start. This is a totally new philosophy for the players as we usually start slowly and let the opposition take hold of the game before we get into gear. It took 2 minutes for the first try to be recorded for Heaton moor and then it was wave after wave of attack from Manchester as they encamped on the HM try line. Manchester just could not find the breakthrough and after a loose throw in at the lineout gave HM the ball back, they broke free and scored on 8 minutes, much against the run of play. A further 2 minutes of attack from Manchester saw HM again pinned back on their own try line and as the half came to an end, Will Austin took control and ran the ball in to half the deficit at the break.
The 2nd half commenced with Manchester making a 7 player turn around to allow for all players to get more game time. With HM having won the toss and kicked off, it was Manchester who started with the ball in hand. This half really saw the visitors in the ascendancy with crisp line out work, excellent scrummaging and Heaton had no answer to Manchester’s loose play at the breakdown with ball after ball conceded through great Manchester rucking. The pressure took its toll and H Bomb was able to dart over in the 16th minute to level the scores, 2 apiece. With all the possession in Manchester’s favour it wasn’t long before this advantage was turned into a 3rd try, this time William, on loan from Shanghai, again went over to seal this well deserved victory against worthy opponents.

Inexplicably, Manchester took their foot off the pedal and HM were able to take full advantage in this 2nd game. Whilst Manchester had controlled the 2nd half of game 1, they coughed the ball up from the start and were then on the back foot as HM pressed for the try line. Again and again HM were repelled and the match seemed to be being played in the middle of the pitch with no goal line threat in sight. It was 3 minutes before the breakout occurred and even then, a fantastic try stopping tackle from Eddie seemed to have removed the threat. HM were on the up and as Manchester scrambled their defence to resist the tide against them, good hands through the HM backs saw them run over for try one of this match. This woke Manchester up and both sides wrestled for control of the game with HM now matching Manchester in the loose, their passion for success re-invigorated. In the 9th minute another break away allowed HM to increase their lead and at half time HM were 2 up with all to play for in the 2nd half, whilst Manchester had to regroup for the slog ahead if they were to get anything out of this match.
HM started the 2nd half as they finished the 1st and ran 2 further tries in, in the first couple of minutes, leaving the Manchester players with a mountain to climb at 20v0 down. What a response though, first they took the game by the scruff of the neck and tackled as if their very lives depended on it. They took back control of the loose and tightened up in the line outs to push HM back with the desire to turn pressure into points. Josh broke free in the 15th minute to put some points on the board for Manchester and the recovery was under way. It was Josh’s determination at the base of the scrum that kept pushing HM back. He competed for every ball and through his pressure, HM were guilty of conceding far too many penalties around the breakdown in their attempt to minimise Josh’s influence over the Manchester players. In the 18th minute, Manchester won a scrum and Josh picked up and ran for space. Thomas saw that help was required and ran an excellent line to receive the ball and go over for his first competitive try in Manchester colours. 20v10 and Manchester confidence was building. Again they put the pressure on and HM tackled all over the park to stop the advances of H Bomb, Josh, James and Charles who were doing their best to breach the HM line again. As the game entered the last minute of play HM broke free with the ball and their legs took them over to take the game away from Manchester. In the dying seconds it was H Bomb, with his never say die attitude who ran in another try for Manchester to give the respectability the game deserved, HM winning 25v15 at the whistle.

Next week finds us training at Grove Park. After today’s performance the coaches will be focussing on the tackle and clearout areas as well as continuing the good work being made on the benefit of passing. We will also look to instil in the players, the need to come up as a line and this will negate the gaps caused by those who are slightly less inclined to commit to the tackle straight away.