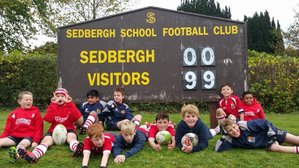 Great Day out in Sedbergh

Under 10's Unbeaten in Festival

Although on this occasion not all the boys were available to travel, a squad of 11 made the journey to Sedbergh School to take place in their annual Festival.The squad featuring, Sam N, Sam Y, Ishy, Mutchy, Alex, Will C, Harry W, Sergio, Kaya, Finlay and Theo were up for the challenge of four fixtures against Waterloo, Sheffield Tigers, Value of Lune and Stockport and all appeared to have taken on board the rule variations which had been introduced this season.
The opening fixture was against Vale of Lune, opposition which we had not faced before, and after a edgy start the boys soon got into their stride. Using their superior speed and confidence in the tackle, the first try came relatively quickly, and with confidence then spreading through the team further tries were soon scored. Some good runs were made by Kaya and Theo, whilst Sam N was lively around the contact area with Manchester ending up winners 4 - 0.
After a short break, the boys were back on the pitch, this time playing Waterloo. This game was more challenging all round and both teams were evenly matched in all areas. After a tense opening, the boys started to get some fluidity in their game, and identified the need to start passing the ball away from the contact, this resulted in an excellent try with the boys looking good for a second successive win. Unfortunately this kicked Waterloo into life and the pressure started to build on the boys. Despite a strong defensive effort, Waterloo managed to get an equalising try in the last couple of minutes. Despite best efforts of driving runs by Alex and some jinking turns by Will C, a final breakthorugh wasn't possible and the score board wasn't troubled again. Final Score Manchester 1 - Waterloo 1.
The third game in the Festival was against our local neighbours and we appeared to save our best for this fixture. On the back of the confidence gained from the first 2 matches the boys really played some excellent rugby. Not only were the boys confident with ball in hand, they were also aggressive in the contact situation, with some excellent rucking from Ishy, and Sam Y. With Sergio, Harry W and Finlay holding their positions on the wings, the boys tried hard to get the ball moving as much as possible. With confidence high, tries started to flow, and the result of Manchester 5 - Stockport 0 was a great credit to the entire squad.
The fixture list was such that we then had a break of over an hour until our last fixture against Sheffield Tigers (again a new opponent for us). The lengthy break, plus the long journey meant that the boys looked tired for this final fixture, and despite Mutchy trying to run through the pain barrier to enable us to take an early lead, our concentration levels were low and tries from both teams were exchanged at regular intervals with the final game ending Manchester 3 - Sheffield Tigers 3
All in all this was a great trip for the boys, and hopefully next year we can get the whole squad to experience the event.
Share via
FacebookTwitter
https://www.pitchero.com/clubs
Recent news