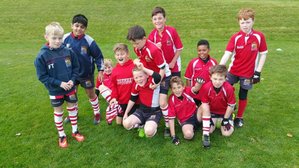 Things looking up for U10's

After the disappointment of last weekends fixture being cancelled due to the pitch conditions, this Sunday the boys were full of energy and played their best rugby of the season against Broughton Park.
Despite a number of experienced players being unavailable the squad of 20 boys adapted themselves well and were quickly into their stride. With the recent focused training sessions still fresh in their minds, the boys were rucking and mauling with real confidence, the passing into space was also much improved.
Plenty of tries were scored across the 5 matches played on Sunday, with a number of boys taking on what they had watched at the Sale Sharks v Pau match on the previous day trip.
There were notable performances by Alex, Jake, Mutchy and Theo whilst it was also good to see new recruit James scoring his first try for the club.
Despite the scoreline, the 5 matches were fairly evenly matched and it was essential that the boys remained focused in defense, with Kaya and Sam Noone frequently ripping the ball in the tackle to secure a turnover.
With Finn and Sam Young also both crossing the white line, they battle for top try scorer of the season looks like it will be a close one this year!