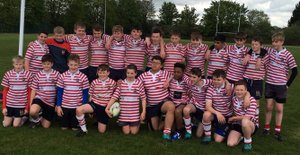 What glorious weather for a great morning’s rugby. I arrived to find all three sides warming up on the training pitch, not that they needed to with the weather that was gracing us.
First up was Lymm vs. Herriot’s. This was a hard fought physical game with opportunities for both sides to play some expansive rugby. Lymm were out of the blocks quickly and putting Herriot’s under some considerable pressure which our friends from north of t eh border were generally dealing with well. Sustained pressure gave Lymm the break through that they needed and they eventually ran in three tries before the half time whistle, one of which they converted to take the lead into half time 17 – 0.

In the second half again Lymm came out strongly, Herriots were extremely strong in defence and were unlucky on a couple of occasions not to break the Lymm line and score some points. In defence Herriots proved to be stronger than they were in the first half and did a much better job of containing a strong Lymm team. Unfortunately the y could not hold out fully and conceded a 4th try which was then converted to give a final score of 24 – 0.

Manchester’s first game was against Lymm, a fixture which has always been one of the hardest of the season. We went out and were a little slow out of the blocks and slightly in awe of Lymm, this unfortunately cost us and Lymm ran in two tries relatively quickly. As the half went on the boys found their rhythm somewhat more and were much more competitive, the half becoming a much more even affair. Half time gave Sam and Doug the opportunity to rally the boys and they came out well in the second half and spent a good portion of it in the Lymm half. Tom Jones made many great decisions and for a period ran the game, at this point he kicked delicately over the lymm defence, the run of the ball was with us and Tom Walsh was there to pick up the ball and run the try in, TJ comfortably converted. This gave Manchester the confidence and belief that they hadn’t necessarily had up to this point. The game was restarted and Lymm were soon under pressure again, some strong forward work and good hands resulting in Tom Jones wrong footing the Lymm defence and running a try in to the corner. 12 – 10 to Manchester. We made some changes to the team to ensure as always that boys got game time which upset the balance of the side, Lymm put on the pressure and came back strongly and a few missed tackles cost Manchester dearly, Lymm ran in three quick tries, converted two of them and the game finished Manchester 12 – Lymm 29.

A little jaded from a hard game, Manchester then faced a Herriots side that wanted to take something from the day. Herriots started the game with an intensity and pace that allowed them to boss the opening minutes and put two quick scores past Manchester, both of which they converted. Manchester came into the game and competed well against the opposition, a missed tackle cost them and Herriots took advantage to score and go in to half time 21-0. In the second half Manchester were much more composed and made a game of it. Some strong play from the forwards helped to stabilise the team and two good tries were run in by Ciaran and Tom Walsh, neither of which were converted unfortunately. Final Score Manchester 10 – Herriots 21.

Our boys should be extremely happy with their performance today, Doug and Sam made a lot of changes to ensure all boys had good game time. We have to bear in mind that four of our lads have only played for the last couple of weeks, three having never picked up a rugby ball in their lives before then, they went out and played some extremely strong competition and were not fazed by it at all. The four new members of the squad, Luke Boon showed no fear and on several occasions ran hard, strong and low at both Lymm and Herriots , Ross made some strong carries against both teams, Joe Corbelli made some good tackles and gained ground for us and finally Joe Hewitt showed good hands and pace around the pitch. Well done to you all.
I would like to thank Lymm and Herriots players, coaches and supporters for a great day’s rugby; we look forward to playing them again at some point in the future. It’s a shame that Manchester did not come away with a win.
Roll on Waterloo and the start of the Lancs. Cup next weekend.