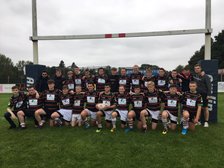 Holding a powerful wound-up Waterloo late in the first half a break away try by our colts deflated the visitors with the inevitable effect in the 2nd.

Although both teams had their chances in an evenly contested first half neither team were able to convert pressure into points until the Waterloo midfield dropped ball in the 22 when pressing for a score allowed the Manchester centres to hack through. The impressive Manchester locks Ollie Lee and Luke Tyrrel were first to the ball with Luke outpacing the cover to score under the posts with a 50 metre run.
Robbie Heywood converting.
Such scores tend to hurt teams disproportionately immediately before an interval and it was therefore no surprise that it was the home team that came out of the break hottest to score again following some good forward driving straight from the kick-off. Ant Walker exploiting a narrow gap round the fringes of a driving maul within a minute of the start.
Although the conversion was missed Waterloo realized they were two scores behind and therefore valiantly tried to run everything they could, turning down several kick-able penalty opportunities in the second half.
However the Manchester defence always held with crucial line-out turnovers being key. However play more often than not was kept in the Waterloo half thanks to some excellent tactical kicking by both Calum Hendry and Sam James.
Manchester were however seemed always just one pass away from finishing off some good moves themselves until three quarters through the game. That factor and an unhealthy penalty count always just kept Waterloo in the game.
However at that point history repeated itself following a Waterloo attacking line=out when Ollie Lee was lifted well to steal the ball. Manchester ran it up the middle to set up quick ruck ball on their own 22. James Stannion cleverly switched play blind with the ball spun out to Luke Tyrrel who handed off one centre and sprinted away for another try.
At that point the Waterloo players aspirations visibly wilted and the game's result was never really in doubt.
Manchester continued to soak up pressure and play territory until virtually the end of the match. Pressing for the line after a corner ball penalty Ethan Harding made a quality outside break with, pretty much, his first touch of the ball, fending off a weak tackle to ground the ball.

Manchester completed this their fifth competitive game V Waterloo keeping a clean sheet in this comfortable win but should still rue the missed opportunities that they had to score. One cannot afford such errors against quality opposition.
Although this was to some extent their most satisfying and convincing win they can still play far far better.
They will certainly need to in the National Cup next week-end if they wish to progress.
Defensively they certainly will need to tighten up their game in what promises to be a battle royal against the best quality and toughest opponents of the season next week, away at Otley.