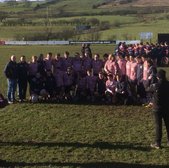 The league title was clinched at Blackburn after some early difficulties were overcome - much like the season itself really.

This report was written by Steve Harrison and heavily edited by Julie, his wife and boss. I will leave it to the reader to decide who wrote what...(not sure Matthew had this problem !!)

Thank you to Matthew Miles for reporting the whole season and I realise why I didn’t volunteer before now. A difficult act to follow and my heartfelt thanks for saving me from being asked more often. It’s not easy! Julie was excited about compiling a match report but I am not sure how gorgeous (Julie's words, not mine) our boys are and how to deal with post-match washing of kits should be a part of match reports as she suggested. She also wanted me to mention the time when United Utilities had to pump the drains in our road and was convinced it was silt from washing Manchester rugby kit (so if Manchester’s groundsman would like to contact us we can reunite you with part of your pitch).

Well. The season ends for the league and we finish with a full 22-man squad and a final victory. It’s difficult to imagine now but we started the season with barely enough players to compete in our first league games, on many occasion fielding only 14 fit players, but to the credit of the boys, the coaches and the manager they pulled together and finished on a high. And what a high.

It sounds so easy, 12-33, as if there was no competition, but there was. The game started with a great kick off which we then collected only to lose the ruck and from then it was mostly pressure from a strong Blackburn team, resulting in an unconverted try for them at 10 minutes. For the next 10 minutes Manchester tried to get possession and finally ended with Conor, the captain, battling the ball over the line for our first try, converted by Will, score 5-7.

There was a good and exciting run by Jake over the half way line after a period of ‘forward’ play and which nearly severed the home defence but was stopped in time by that defence. A penalty kick by Will to the home corner gave a line out to Manchester, duly won and was then followed by a piece of individual skill by Luke to run in a solo effort which took the home defence apart. Conversion by Will to score 5-14 after 30 minutes. Only three minutes later another great break by Luke scored another try under the posts to make an easy conversion for Will to make the score 5-21 at half time.

The second half started badly for the home side as their kick-off didn’t reach the 10 metre line and Manchester were awarded a scrum which they won. The play by this time was sinking into a game of forwards versus forwards but after five minutes Noah took a ball inside the opposition 22 and drove forwards, against heavy tackling by the home team to score a well deserved try. Will converted from 20 metres laterally. The score was now 5-28 and the game was slipping away from Blackburn and their 100% home record looked like it would be ended by an imaginative Manchester team playing open passing rugby.

Toby Yates came on at full-back after injury to Will and looked the part immediately with a kick along the touchline forcing Blackburn into their own 22. From the play following the line out Luke ran in Manchester’s fifth (and Luke’s hat trick-he’s buying the beer next match as a reward) try on 36 minutes to make the score 5-33 unconverted. It looked like it was going to be Manchester’s day.

Blackburn did not lie down and give up but kept going all through the match, refusing to give in and their efforts were rewarded a couple of minutes later with a try of their own which was converted to make the score 12-33. They would still not give up, most of the play at the end of the game was in Manchester’s half of the pitch with continuous pressure from the home side, although they were not rewarded with another score. The game was closer than the score suggested but at the end and overall Manchester deserved their victory. The final whistle signalled wild celebrations from the Manchester players, fans and parents alike with the boys being sprayed with champagne by the coaches.

The match was played with the right spirit from both sides and this was particularly apparent when the home captain shouted three cheers for the champions, not just for Manchester. A great game for the neutral spectator but a fantastic result for Manchester. As it happens, Penrith also won today and thus our win was absolutely necessary. The outcome was in Manchester’s own hands and it was done by their own efforts.

Congratulations to the players and to the coaches for a brilliant season and the thanks of all the parents go out to them and the boys for keeping us entertained throughout the whole time. Not only that, but we are immensely proud of all of them. I for one felt proud to be one of the parents of such a successful team and season. Now the cup! What will next year bring?