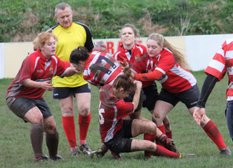 Unbelievably a second draw of the season against Vale book-ended the U18 Girls’ 2011/12 season.

A small visiting squad of six players was willingly supplemented by Manchester’s Rachel Twigg to allow the fixture to be played.

It really did look as if Manchester were going to win at a canter (as they should have done in the away 10-10 fixture) as they raced into a 10-0 lead courtesy of tries from Emma Broadbent (yes, again) and inevitably from top scorer this season Hannah Johnson.

Emma’s try was pure determination as she forced her way over the line, Hannah J’s was a trademark run in from way out through several despairing tackles.

Maybe it was complacency but as the first half developed, Vale grew into the game and managed to sustain some pressure in Manchester’s 22. Some slick handling by the visitors in very poor conditions was rewarded by their first try, cutting the lead to 10-5.

Emma was having an excellent game in the front row, making up a dominant pack partnered by Charlee Chambers and Amber Smith but as Manchester rolled their subs on on and off, Emma was asked to drop back to scrum half. This switch paid dividends when a perfectly timed pass from the back of the scrum found Leanne Murray at speed to restore the ten point gap at 15-5.

Manchester were again coasting until an unfortunate incident allowed Vale back into the game at 15-10 when a try was awarded (as much to their surprise as Manchester’s!), with the ball appearing well short of a rapidly disappearing try line as the muddy conditions took their toll on the pitch.

The half was finished strongly as Manchester camped on the Vale try line. The chance to tale control of the scoreboard was lost however when a score was disallowed for being held up, and then, the attacking scrum as a reward for Vale's stubborn defence.

The half time talk concentrated on the many positives, with the instruction to the girls being to carry on the same and close the match out as soon as possible. Vale’s talk must have been similarly positive as they attacked the ball from the restart and managed to register an early score and the equalising dry at 15-15!

For the first time, Manchester now looked ragged and it was only thanks to a good clearance kick by Leanne that more damage wasn’t done. Gradually the home side regained lost ground and when a scrum was won against the head within their 22, Charlee was able to pick up the scraps and charge in for what was either expected to be the winning try or, just maybe, the base for a fifth-try bonus point.

Things didn’t work that way however as the visitors (and Rachel) gratefully seized on some loose play when Manchester really should have been keeping the game tight waiting for the final whistle. A fourth try resulted to gift Vale an unlikely second draw to finish off their season.

Any of the pack could be nominated for player of the match – Amber, Emma, Charlee or Bethan Emuss (who has really hit form at the end of this season), but for her attitude and performance, unfortunately in a visitor’s shirt(!), this has to go to Manchester’s Rachel.

Click CLICK HERE for pictures by Liz Broadbent or use the tab at the top of this report.