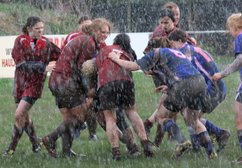 Battle Against The Elements (oh, and Glossop!)

With Manchester Rugby Club hosting several games to help complete the league programme, the only playable pitch at Grove Park was certainly the worse for wear by the time this match started. Things could only get worse as the heavy rain worsened to a hailstorm as the girls lined up for the kick off.

An odd format of nine-a-side was reluctantly agreed to, although that meant Manchester had all their available players on the pitch at the start, including Hannah Goddard who was bravely carrying an injury from the earlier match against Vale. A large travelling squad from Glossop meant that they had the luxury of a maximum number of rolling subs through the game.

It was clear from the off that Glossop were far keener to play than Manchester and their lively start allowed them to take the initiative with little resistance. With the weather deteriorating and spirits low, it came as almost a relief when the five-try bonus point was conceded and the league programme concluded with a 33-0 defeat to our nearest neighbours!

Well...a relief to the coaches that is! As the girls huddled together after the final whistle, Charlee Chambers as captain decided that this was not the way to finish the season. So, with injuries to Leanne Murray and Hannah G (who finally decided that she really wasn't to fit to carry on playing), Manchester's remaining seven players were rallied and a 7-a-side game was quickly organised before the retreat to the changing rooms.

Ironically, now playing in the format that Manchester wanted to play to start with, the girls came alive and played some excellent sevens rugby, defying the conditions, and winning the unofficial final game by three tries to two! This form should give Manchester some confidence to take to the Worcester 10s this weekend - so Charlee, yes you were right to “encourage” your team to play on after all!

Special mention should go to Lucy Colledge who was outstanding in both "halves" of the Glossop game, putting in the tackles in the first and making some good breaks in the second as the rugby finally started to flow as well as the rain.

As our fellow Cheshire RFU club, we offer our congratulations to Glossop for a late season run that put some pressure on the Lancashire clubs, securing runners-up spot in the RFUW U18s North league.

Player of the Match for her combined perfomances in a Manchester shirt against Vale of Lune and then Glossop goes to Emma Broadbent.

CLICK HERE (or the tab at the top of the report) for some amazing photos by Liz Broadbent which really shows the commitment that our girls give to playing rugby!