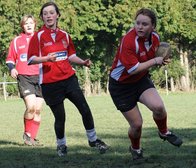 A patchy but effective performance from Manchester saw the girls home against an improving Bridgnorth side.

The Bridgnorth team were clearly determined to correct the large reversal that they suffered in November. Their coaches must have thought the worst was about to happen however when a clever show-and-go by Emily Houghton created the space which allowed her to free Hannah Johnson to touch down in the corner after just two minutes.

Bridgnorth were not unsettled by this disappointment however, taking control of the ball for a long period following the early score. Although Manchester were unable to regain possession, any pressure was relatively easily soaked up, proving a frustrating tactic against the home side. After numerous phases a loose ball was finally seized upon by full back Jess Gurney who kicked clear. Emily and Hannah sprinted after the clearance and totally against the run of 10 minutes or so play, Emily touched down for a 10-0 lead.

Bridgnorth continued with their aggressive forward play but the Route One approach was not going to work against a tight Manchester defence. Despite their possession, Bridgnorth were forced backwards and deep into their own 22. Finally the ball was released with the packs squabbling near the corner. With everyone expecting the ball to go wide, Nieve Jones saw an opportunity by rounding the forwards to touch down in the corner, 15-0. To be honest, Nieve had made life difficult for herself, not only by scoring so far out, but by taking the kicks at all with an ankle not yet fully recovered. With Katy Morten still injured, Nieve insisted on taking the responsibility but the wince when kicking suggested that this was not one of her better decisions...

So far, it was the backs that were breaking the defence, but another strong game by Amy Johnson soon saw her score the only forwards try of the game. Excellent strength and determination was shown by Amy as she twisted out of two or three tackles to force herself over the line.

Half time was reached following a great try created by Hannah and Emily who showed great understanding of each other’s play throughout. Emily once again made the telling break, Hannah raced into midfield, splitting the defence as Emily flicked the ball inside, to score under the posts. At 25-0 at the break, Manchester had made sure that this fixture was not going to become a banana skin after all.

The talking point at half time was the extremely high number of penalties conceded. It was difficult for the coaches to advise on how to reduce the infringements, but with the referee intent on awarding so many, it was more a case of advising how to defend against them!

The second half started in a similar way to the first with an early score for Hannah. Again a good break by Emily allowed Hannah to sprint down the wing. It said a lot for Bridgnorth’s spirit (and their winger’s speed!) when Hannah’s opposite number chased her all the way to the line. 30-0.

Manchester were now dominating the territory as well as the scoreboard. A disappointing lack of intensity by the forwards however when close to the home team’s line, resulted in Alyx Maw (deputising at centre) adding her support. She was injured for her troubles and with no substitutes available was moved to the right wing to recover. Unfortunately, or fortunately as it turned out I suppose, the ball was moved to the still recovering Alyx on the blind side from the base of the scrum and she bravely took up the challenge to score in the corner, giving Manchester a 35-0 advantage. Soon after Player of the Match Alyx was forced to take an off field break for ten minutes, leaving Manchester a player down but staying well in control.

The number of penalties conceded had reached epidemic proportions and with the touch judge indicating an apparently generous 10 metres to the defensive line, the Manchester defence was left to halt attackers already up to speed by the time they reached them. No doubt the practice provided will pay off in future games even if it was hard to take on the day!

A series of penalties advanced Bridgnorth to within metres of Manchester’s try line. With Manchester stood on their line, the defence was eventually breached in an unlikely manner. With the drive stopped by some determined defending, one of the Bridgnorth forwards was considered to be in the way by our defence and was hauled out of the melee. Unfortunately that forward was holding the ball and was effectively dragged over the line for a consolation score for the determined Midlanders. An excellent conversion yielded the full seven points.

With less than 10 minutes left, an excuse could be made for the heavily penalised forwards who began to look reluctant to try to secure the ball at any breakdown, almost expecting play to be halted. Nonetheless Manchester’s backs ensured a strong finish courtesy of the partnership of the day as Emily again created the space and Hannah again made sure of the points. A reply to Bridgnorth’s score was made and it looked as if Manchester’s fortieth point would complete the scoring.

Bridgnorth were determined to have the last word however (they certainly had the loudest...) and they chased down the final restart. Manchester secured possession however but some extremely aggressive tackling became difficult to cope with as Bridgnorth went all out to grab the last score. Just as it looked as if they may make a break, a very alert Amy Lees caught her opposite number yet again and dislodged the ball. Showing great football skills, Amy dribbled rather than hacked the ball forward, through the out-of-position defence and touched down under the posts for a very satisfying ninth and final try. At 45-7 it looked as if Nieve was going to be rewarded for her kicking persistence in adversity, but no, the ball drifted wide and the final whistle blew. It was as well that Nieve’s ankle held out as her game control was once again crucial.

The long trip home certainly felt a lot better for such a convincing result. Strangely, despite the score, the game allowed Manchester to concentrate on their defensive skills for long periods as they faced a barrage of tap-and-go penalties. Fortunately their excellent attacking skills ensured that the result was not in doubt.