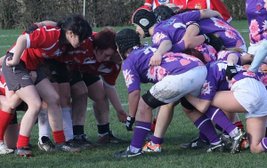 Nine tries against Bridgnorth last week were followed by another nine against Barnsley. However this was a far more satisfying performance; last week’s was scrappy in places, this week was outstanding at times. The concern that Barnsley had pinched a 25-5 win on home turf meant that Manchester had to take the opposition seriously and this showed in the team commitment and individual flair.

An early wakeup call was not really needed, but an interception try saw Barnsley take a very early lead, although it wouldn’t be fair to say that this was against the run of play after only two minutes!
Manchester looked good however and soon regained possession from the kick off. The forwards kept control of the ball and at such an early stage there was no need to force the game and risk a second interception from two very alert Barnsley centres. When the ball did come back, Manchester’s backs were released, leaving Hannah Johnson with a long run in down her wing to level at 5-5.

Nieve Jones had clearly been identified as a danger and took a couple of heavy tackles as Barnsley imposed themselves on the game. (To be fair, they were right about Nieve and she was later awarded Player of the Match by the opposition to confirm that fact!). From one of these hits, a penalty was awarded which Nieve cleared to touch for an attacking lineout. The pre-match lineout drills with Bethan Emuss and Charlee Chambers lifting Amber Smith worked well and the forwards were able to drive within metres of the line. As the momentum was lost, the backs were ready and a brilliantly timed pass saw Leanne Murray dive over for the second try.

The third try was great to see for a couple of reasons; firstly that Charlee scored at her own club, and secondly the way the forwards and the backs worked together. Bethan made the initial ground, offloading to Jess Gurney who combined effectively with Emily Houghton all afternoon. Held just metres short, the forwards were on hand again, and it was Charlee who finished off the attack started by Bethan to take the score to 15-5.

As a Barnsley player was treated for an injury, Manchester’s approach to the game was demonstrated as the whole team linked together and went into a huddle awaiting the restart.

Emily, who had a huge game in defence and attack, made a big hit on her opposite number which put the visitors on the back foot again. A desperate Barnsley defence looked as if they had recovered the ball when some great counter-rucking by the Manchester forwards ensured that the ball came back on the red side. Amy Lees was quick to take advantage and the ball was worked back to Emily. From 15 metres out Emily tried to run straight, twisting out of tackles and almost forcing herself over the line. Again, held just short, Amy J was there in support and powered over herself to get the score, 20-5.

Barnsley took the kick off well and pressured Manchester towards their own 22 metre line. When Manchester conceded a penalty, it was clear that Barnsley saw this as their chance as they carefully set up the move. Manchester’s defensive line was text book however. The visitors were never going to break through it and with Nieve giving her opposite number no time whatsoever, the move broke down and the ball was cleared. Knowing that they had to reduce the deficit by half time, the visitors put their hosts under pressure as the half closed but the needed breakthrough was not made. At 20-5 at the break, Manchester were reminded that they just needed to keep their concentraion to take this game.

Harriet Parsons was the first scorer of the second half, taking the ball out wide after Leanne created some space, but still having to work hard to avoid several tackles before touching down in the corner. It was good to see Harriet on the scoreboard, but even better to watch was her brilliant run which set up Amy J for her second try. A very good Barnsley clearance was caught cleanly by Harriet well inside her own half. With some space in front of her, Harriet set off and a jinking run took her deep into the 22 before the defence could slow her. Having run towards her own players, plenty of support was in the area and it was Amy J who took advantage of Harriet's break.

Manchester were now well in control of the scoreboard and two quick tries by Emily were no more than she deserved. Perhaps Emily’s scoring gets noticed more on the match sheet, but her tackling was again totally committed throughout. Unfortunately that led to an injury break off field for attention to her collarbone. Emily’s first try came from a restart which was caught and carried well by Emma Broadbent before Nieve created the little space that is all Emily needs. Her second came after a scrum was won against the head. This time her centre pairing with Jess again paid dividends as one of Jess’ perfectly timed offloads let Emily in.

With Manchester now 40-5 up as a result of another typical sprint to the line by Hannah, the match was effectively won. It was a sign of the efforts made by both sides that injuries now started to disrupt the flow of the match. With Emily off the pitch and therefore a player down, Manchester were temporarily willing to contain Barnsley. Even so, Leanne continued to look as if she may break the defence as she moved in to a tighter three quarters while the girls awaited Emily’s return.

Barnsley finally doubled their early score with just a couple of minutes left. A fine run along the wing saw Manchester exposed and even with Emily back on and running across to chase hard, Barnsley were not going to be denied their consolation try which looked as if it would close the scoring at 40-10.

There was enough time to restart however, and all credit to Barnsley who chased after the kick determined to grab another late try. Manchester gathered however and as the teams fought over the ball, Charlee failed to get up from the ruck and was in obvious distress. As the play moved away from her, the game was allowed to carry on. From midfield, Amy L, just as she had done at the same point the previous week, saw an opportunity and sprinted through from midfield to ensure Manchester finished the game on a high.

Here’s a trivia point for you: Manchester’s ninth try of the game marked a run of scores from the team stretching back past the win at Bridgnorth (nine tries), past the defeat at Tyldesley (two tries) and even two tries back into the win against WP Leeds. The record? Twenty one tries without a conversion, by any of our kickers! It was fitting then that Amy, as try scorer and captain, should get that particular monkey off our backs by converting her own try and closing the game out at 47-10 to Manchester.

Sandbach were excellent hosts, and it was good for the club to see the important contribution that their players Megan Pancutt and Charlee have made to our team this season.

With Caldy’s unexpected defeat to WP Leeds, the win has moved Manchester up into second place in the league as we take a break for next weekend’s divisional match.

Match photos by Liz are here (for an idea of Charlee's work rate, just look how many times she gets into the photo! She will be badly missed as the initial news is a six week rest for a bad sprain suffered right at the end of the match)>>>
https://picasaweb.google.com/115231797605651435788/RugbyManchesterGirlsU18sVBarnsleySun13Mar11?feat=email#