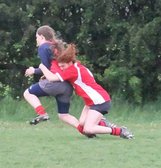 Manchester joined eleven other clubs from around the country at the National 7s competition held at Lichfield RUFC on Saturday.

An early arrival meant that Manchester could choose where to set up base for the day...unfortunately we managed to choose what probably turned out to be the windiest area in Staffordshire let alone the rugby club. This tactical error by the coaches meant that the team gazebo fast became a liability in the breezy conditions. After some brave resistance, we decided not to prolong the comedy effect for our competitors and to brave the elements instead.

Studying the draw for the day, we found ourselves in a tough group alongside Reading and Worcester – two matches which would decide whether we progressed to the Cup, Plate or Bowl for the afternoon round-robin.

First up was Reading. Manchester kicked off and proceeded to pin Reading between their 10m and 22m lines for several minutes. Eventually the pressure and territory was rewarded with the first try of the day scored by Hannah; Nieve’s conversion hitting the post. Manchester received from the kick off and took the ball straight back into Reading’s half, looking to double the score by half time. Unfortunately Reading finally managed to get their hands on a loose ball, and with Manchester in full attack mode, they escaped their half for the first time to equalise against the run of play. Reading made the most of the half time break to recover and the second half was much more even. So even in fact that there was no further score, Reading holding out for a 5-5 draw much to Manchester’s disappointment.

Energy levels had clearly dropped for the Worcester game after what felt like a setback. Worcester came flying out of the blocks, gratefully touching down in the first minute when their kick was not cleanly picked up. A shell shocked Manchester then shipped two quick tries, unable to escape their half, just as Reading had struggled against them. The second half was a different story as the girls dug in. Worcester were a class outfit though (eventually finishing as Cup runners-up on the day) and kept Manchester on the back foot, pinching two more tries to win 29-0.

Despite that disappointment, the strength of the group meant that Manchester were still able to progress to the Plate when Worcester ran six tries past Reading to leave Manchester second on points difference. There was some consolation at this point as Manchester became the only North West team to make the Plate competition, Tyldesley dropping into the Bowl as a result of their two first round defeats. That fact in itself gives an idea of the strength of the National 7s teams.

The first of our three Plate competition games was against Ellingham & Ringwood. Although spirits were raised during the break, Manchester never really settled into this match. Perhaps some over confidence meant that the support was not there when Leanne came close to scoring an equalising try early on, but a 17-0 reverse at half time left another mountain to climb. A quick score when Nieve ran a perfect angle to touch down under the posts flattered to deceive as E&R replied immediately to snuff out Manchester’s resistance, running out 24-5 winners.

A nightmare first half against Darlington Mowden Park effectively put paid to Manchester’s chance of any silverware. Manchester should have scored first but an interception try, followed by a second try after a charge down of a speculative kick, saw an early lead established. Manchester dejectedly went through the motions before the relief of full time at 34-0. Injuries to Megan and Alyx left a squad of just ten to play out a daunting last match against the hosts.

Lichfield had been the class team of the Plate competition so far. Manchester chose to start with our five U18s who will be moving on to senior rugby next year, ably supported by Amber and Charlee up front in the first half, and Emma and Leanne in the second. And what a performance this was to finish on! Things looked bad from the kick off when Lichfield found space down the right touchline. With the home support already celebrating an early try, Amy L, through sheer determination as much as her pace, tracked back to make an unlikely try saving tackle. Although the ground gained eventually resulted in a score, Amy’s example seems to galvanise the girls with the home side held to just 5-0 at half time, the whistle blowing with Manchester threatening their line.
Lichfield started the second half aggressively and this time it was Katy who made a superb cover tackle, racing after and hauling down her opposite number just metres from the line. Manchester broke out from defence and determined running from Jess, Amy L and Leanne freed Nieve for a spectacular try as the girls finally showed the flair we had been hoping for from the start. With the minutes ticking by, Lichfield were now clinging on for the point they needed to take the Plate. The touchline support was loud and clearly nervous, no doubt having expected an easy ride if they had looked at the group results so far. From some more Manchester pressure, a loose ball in their own half was hacked up field by Lichfield, the ball sitting up kindly after the second or third kick, and, to Lichfield’s relief they clinched their third victory (10-5) to take the Plate. The generous applause from the Lichfield girls and coaches was well deserved as the girls finished the day with a performance to be proud of.

After a bright start, Manchester did not really do themselves justice in this tournament, effectively finishing 8th even though they were clearly a match for the eventual Plate winners. Nonetheless it was good to pit ourselves against unfamiliar opposition from as far afield as the South Coast and the North East. The high points of the day were a solid opening match against Reading and a gutsy closing game against the hosts and Plate winners Lichfield. Nieve’s Chris Ashton style victory arm-in-the-air salute as she broke our duck against E&R was also worth waiting for! Oh yes, and Charlee’s elegant slide down the grass banking as she returned from the clubhouse to the team’s windy base camp...

Some great pictures of the day, courtesy of Elizabeth Broadbent are here>>>
https://picasaweb.google.com/115231797605651435788/RugbyManchesterGirlsU18sAtLichfieldNational7sSun14May11?feat=email#