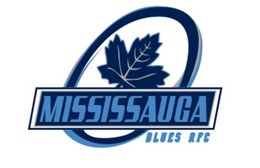 The Caldy team, supplemented by a handful of Manchester and Northwich players, expected to provide strong opposition for the undefeated visitors from Toronto.

The score after a curious first half under the floodlights would have suggested a one-sided game. Actually that was true in two ways: the hosts had all the territory and most of the possession; the tourists scored all the points!

Following a period when Caldy camped in the visitors’ half, Mississauga broke the deadlock when they took a scrum against the head. The unexpected ball was gratefully fed out to the backs and a strong run by Charli Mocon from half way scattered the out of position defence. As the defenders tried to recover, Charli was chased towards the corner but a touchdown was inevitable. An excellent conversion from wide made the score 7-0.

Caldy returned to the job in hand after this setback, and from the restart kept the Canadians in their own half. The defence looked sound however, the visitors looking content to soak up the pressure and wait for the opportunities rather than force the game. Sure enough, a dropped pass presented the chance of a breakaway and the tourists’ second excursion into Caldy’s half resulted in their second try. This time it was Danielle Spice who went over under the posts, giving Charli a much more straightforward conversion to make it 14-0.

Caldy returned to their now familiar area of the pitch, rarely any further out than the 10 metre line. A long penalty kick to touch gave Caldy an attacking line out on the 22 which the hosts really needed to capitalise on having had all the territory. Unfortunately the lineout was lost on Caldy’s own throw. As a result, a huge gap opened up where the defensive line should have been. The very rapid Mississauga three-quarters again showed patience by moving the ball across the pitch before straightening. Some despairing touchline tackles were then evaded as Emily Ricketts closed in on the line for the third try to make it 19-0.

Caldy seemed out of sorts in attack, proving that possession and territory were not everything. The attacking threat by Caldy was again reversed when an over ambitious looped pass was neatly intercepted by Mississauga's Danielle Spice. As she raced from just outside her own 22, it was no longer a surprise that four visits beyond Caldy’s 10 metre line, all at speed, had resulted in four tries. Charli’s conversion made it a very unlikely 26-0 to the Blues.

The half closed with Caldy still in the visitor’s half but pointless despite all the territory established, leaving Mississauga well in control of the scoreboard.

It seemed unlikely that Caldy would be able to close the gap completely but a more respectable scoreline was certainly expected in the second half. The game restarted with the two teams looking well matched, although the Blues began to enjoy more possession. Even so, some more alert Caldy tackling prevented the now predictable powerful running from the visitors’ backs and the game became confined nearer half way. As a way of breaking the defence a long kick was attempted over the heads of the forwards for Caldy’s backs to chase down. Unluckily, an effective catch was quickly spread wide and, as Caldy advanced, a gap appeared on the flanks, allowing a killer try to be run in, fifteen minutes into the second half, creating a huge 31-0 lead.

At this point, the Caldy forwards seemed to decide to take the game into their own hands. A driving move wasn’t pretty to watch, but forced play deep into the Blue’s half. A penalty award as the visitors illegally tried to stop the movement was tapped quickly so that Lucy Earlam had only a short trip to register Caldy’s first points of the evening, at 31-5.

Mississauga were effective from their restart and for the first time in the match, kept Caldy in their own half for a sustained period. Caldy, encouraged by their forwards’ success, kept the ball tight patiently waiting for the moment. Unfortunately, after several phases, the ball was turned over allowing yet another successful counter attack to be launched. This really summed up the difference between the two sides on the day, as Emily Ricketts sprinted through the over committed “attacking” line, to touch down under the posts for Charli to convert to 38-5.

With such a daunting deficit, Caldy should be given credit for continuing to take the game to the visitors. An indication of the competitiveness of the two sides was seen, or rather heard, from the whoops of the Mississauga defence as Caldy were held up on the line following an attacking five metre scrum. A second five metre scrum eventually proved irresistible however. The ball was secured but a well drilled defence stubbornly kept the hosts at bay, just metres out. However as the move drifted wider, a gap was eventually found, allowing Alison Burrows to force the ball over in the corner for a consolation try.

The 38-10 final scoreline was certainly not as convincing as it sounds, although you cannot argue that a six-try tally is in any way “lucky”!
The Canadians were warmly applauded at the end for taking their chances in attack and standing firm in defence. And really, whether you are playing in Toronto or on the Wirral, that is what the game is all about...as was the reception in the clubhouse afterwards.

The generous comments and presentations by the coaches and players acknowledged a good game of rugby, played in the right spirit between two girls’ teams based over 3,000 miles apart.