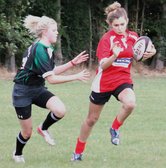 Manchester did enough to beat an improving Bridgnorth team as Alyx Maw finished off her previous night’s birthday celebrations with a brace of tries.

Manchester suffered from a slow start both in the late arrival of a referee and then in the way they started the match. The visitors were caught napping when a speculative long kick was not fielded well and a good chase by Bridgnorth allowed them to hack it over the line. Although it looked as if Manchester would be able to ground the ball, some confusion benefitted the Bridgnorth attacker who pounced on it first to open the scoring.

Manchester were very disappointed to find that Bridgnorth were unable to select an experienced front row and that scrums would therefore be uncontested. That disappointment was compounded when Bridgnorth were allowed to ‘win’ the first scrum on Manchester’s put in! With the defence at sixes and sevens because of this unexpected turn of events, the Bridgnorth half backs were given an almost uninterrupted run to the line to double their score, converted to a dispiriting 0-12.

This second setback proved to be a wake up call however. The Manchester forwards chased their kick off well and pinned the hosts back deep in their 22. As play moved towards the left hand touch line it seemed that Manchester’s options were all out wide as the forwards set up the platform. Spotting a gap along the touchline however, Alyx took the opportunity to take the ball blind and powered over in the corner to open Manchester’s account at 5-12.

With Emma Broadbent fit to play but nursing a back injury, Manchester reshuffled last week’s team with Hannah Johnson moving back into the three quarters so that Emma could play her old U15s position at scrum half. Hannah’s pace in the backs paid dividends when, taking the ball on the half way line, she was able to outsprint the opposition to bring Manchester back into the game at 10-12.

As Manchester started to take control, Rachel Twigg and Lucy Colledge combined well in midfield to create some space, but when they were closed down by the Bridgnorth backs, the move looked as if it was going to stall. As the forwards arrived to take control a quick pass out by Lucy to Alyx who was arriving at speed again created an opening. Maybe Alyx would have appreciated the shorter trip to the line that she had for her first try! Her second called for a long sprint but the Bridgnorth defence were unable to recover and catch her. Touching down under the posts to put the team in front, a neat conversion of her own try created some daylight between the teams at 17-12.

As the first half came to a close, Bridgnorth again tried their tactic of lobbing the defence to see what would happen. A particularly long and high kick was brilliantly taken by Leanne Murray, who at fly half on the team sheet seemed to be managing to cover a full back’s duties as well! Turning defence into attack Leanne took the ball forward with Hannah in support. All credit has to go to the Bridgnorth defence however who managed to stop the move just metres short of their line. With Manchester’s forwards dominant, it seemed as if they just needed to drive over for the score. However a fumble was penalised as a knock on and the half closed with that slender 17-12 lead.

With Manchester now in the ascendancy, it was disappointing that several opportunities were missed in the third quarter due to a sequence of uncharacteristic handling errors. One more try was probably all that was needed to break down the home team’s resistance but this proved difficult to get. Finally that moment seemed to have arrived when Hannah was pulled back chasing a loose ball looking certain to score and the kicking tee was carried on to convert the expected penalty try. Unfortunately the referee decided that only a penalty was justified, although only 10 metres out. Somehow in the disappointment and confusion the tap was knocked on and the resulting scrum allowed Bridgnorth to clear their lines.

To add insult to injury a rare attack by Bridgnorth was then rewarded with their own penalty try, perhaps helped by some touchline encouragement, and the home side were back level at 17-all.

Manchester were riled at the decision but control was needed to make their point on the scoreboard. Once again the backs and forwards combined well and the difference between them became blurred as Lucy made a telling break to find Bethan Emuss on her shoulder who took the ball well out wide. Still with a lot of work to do, Bethan was able to carry the ball away from her chasers and had the presence of mind to take the ball under the posts to give Alyx the best chance of claiming the extras. This she duly did for a justified 24-17 lead.

With time up on the clock, Manchester were advised that there were still three minutes to play, enough time to give Bridgnorth the sniff of a draw. A controlled passage of play by Manchester when they retained the ball in their own half almost had the unexpected bonus of a breakaway try. Unfortunately Hannah was again denied when she was pulled back. Nonetheless, a satisfactory result, if not necessarily score, was achieved as the whistle finally blew.

This was another good performance by forwards and backs. We will clearly have to stop saying the “newer players” as Lucy, Rachel, Hannah Goddard and Molly Hastie are now a key part of this season’s team and played a big part in a good away win.

Player of the match: Bethan Emuss