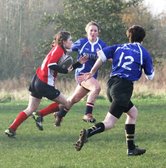 In a match that didn't have the intensity of previous encounters, Manchester lost out to league leaders Tyldesley on Remembrance Sunday.

Manchester started the game on the back foot, having been forced to defend a well chased kick off. Some good control by the forwards, in particular Rachel Twigg who made several good carries throughout the game, almost escaped the 22 but Tyldesley held their defensive line well, refusing to retreat from their field position.

Once possession was given up, Tyldesley made the most of it and one or two missed tackles allowed the home side to open the scoring, soon doubled to a dispiriting 14-0 deficit.

At this point, Manchester woke up, realised that as usual there was very little between the two sides and started to make headway, camping out in the Tyldesley half. With Tyldesley’s well organised defence, it needed some slick handling by Charlotte Hockenhull and Hannah Goddard to move play forward to within metres of the line. At this point, the forwards took over and a determined Alyx Maw made sure that Manchester were finally on the scoreboard at 14-5.

Manchester were now in the ascendancy and an equalising try looked likely as Hannah Johnson broke from half way. A lack of support resulted in a turnover unfortunately, and, with Manchester unable to quickly turn attack into defence, a sucker punch of a third try was conceded against the recent run of play.

This score seemed to deflate Manchester and unsurprisingly lift Tyldesley who had had a difficult time containing Manchester since their opening forays. A text book try was then scored by Tyldesley when they worked the ball along their backs with some well timed passes, leaving Manchester with a mountain climb in the second period.

A late first half score did give some hope however... It actually looked as if Charlotte H had got her first try a little earlier but she was adjudged to have been held up over the line. The resulting five metre scrum continued the pressure and an alert Charlotte H gratefully seized on a neat pass by Charlee Chambers to claim her first try (at her second attempt) for Manchester. At 28-10, the match had become difficult but was certainly not over.

Manchester knew that they had to score first however and very nearly did. Hannah J at scrum half was certainly a match for her opposite number and was by now confident to pick up from the scrum and round her, rather than moving the ball out. Having made the opening in this way, a perfectly timed run and angle from Leanne Murray looked as if it was going to result in a spectacular score. Unfortunately the ball was spilled and from just five metres out, Tyldesley were given the chance to clear.

A second opportunity soon presented itself with Manchester now looking more fired up than they had been so far. A defensive lineout throw from Tyldesley was clearly not straight and Manchester chose to take the scrum. Hannah J saw a gap and confidently took the ball forward on her own, but as Hannah claimed the try, the score was disallowed as the Tyldesley defenders were considered to have held her up over the line.

Whether it was the effort of the thwarted comeback or the disappointment of the decision, the effect on the Manchester team was the same and Tyldesley finally got themselves back into their visitors’ half. The crucial score which effectively took the game beyond a competitive Manchester side was scored out wide and Manchester found themselves confronting an unlikely looking (on the balance of play) 35-10 gap.

Predictably this cushion allowed Tyldesley to play with confidence and not a little flair. With five minutes to go, a sliced clearance kick was gratefully pounced upon by our strongly finishing opponents, converted to a final 42-10 score. The 100% conversion kicking award was a real credit to the Tyldesley kicker with a few of the tries having the extras claimed from out wide.

Player of the Match : Leanne Murray