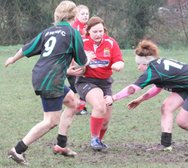 Manchester approached this game wary that a steadily improving Bridgnorth team would be looking for their first win against us.

Only a small squad made the long trip from the Midlands on a frosty morning however, forcing a selection of just seven for the starting line-up from a full home side. Unfortunately rolling subs have been a problem in the past for Manchester, seeming to give the opponents with the restricted numbers an advantage! This time a balanced team was fielded and was allowed to settle before making any changes.

As can be seen from the final scoreline, a rampant Manchester team earned a confident boosting victory, frequently crossing the line from early on. The five-try bonus point and league win was secured by half time but the sporting Bridgnorth girls were happy to compete and a full game was played out.

Leanne Murray opened the scoring thanks to a scrum won against the head by a strong front row of Bethan Emuss, Alyx Maw and Amber Smith. Alyx converted to 7-0.

The restart found Emily Houghton who was allowed enough space to hit the Bridgnorth defence at speed and was unstoppable, doubling Manchester’s advantage as Alyx converted.

With such a quick back line, Bridgnorth could not afford to give up possession but another scrum against the head was snatched thanks to the quick reactions of Hannah Goddard at scrum half, allowing Emily and then Alyx with the kick to contribute another seven points, and take the score to 21-0.

Hannah G was able to get on the scoreboard herself next and Alyx’s fine run of kicking continued with a tricky conversion to take a commanding 28-0 lead.

This was a real team effort though and the forwards deserved to get their own score which was duly provided by Amber, when she built on the work by her fellow forwards and picked up a loose ball. With the Bridgnorth defence overcommitted to the breakdown, a gap appeared which Amber went for. The distance that she had to cover before touching down for her first (ever!) try, gets longer with each telling, but it was certainly a long way for a prop!

The bonus point try was scored inevitably by Hannah Johnson but it was Leanne who once again made the hole in the defence and with good support from Molly Hastie the ball found its way to Hannah, converted by Alyx for the 40-0 league victory. In fact the support play was very good throughout with Manchester benefitting from being able to bring on fresh legs, forwards replacements Molly and Rachel Twigg were always looking for work, either to make the initial break or staying with the runners to keep it moving.

The first half celebrations weren’t quite over however as Emma Broadbent shook the monkey off her back buy getting her first try, just as Amber had with the previous score. It was a really determined carry over the line and great to see Emms on the score sheet, closing out the first half at 45-0.

Lucy Colledge brought up the 50th point early in the second half, with plenty of work to do before reaching the line.

A blip in the scoring happened when Bridgnorth replied, seizing on a loose pass during some rare defensive work by the home side. Charlotte Hockenhull soon restored the scoring sequence after Hannah Clarke and Eleanor Harper had linked effectively to start the attack, bringing up all the fives at 55-7 to Manchester.

Lucy then did very well to break a determined tackle to get her second try after Charlotte had made a great break from the back of the scrum (having now been switched to scrum half). Charlotte then decided that she fancied a ‘C’ in the points scored column after her name and added a conversion to her ‘T’.

Bridgnorth had put up very sporting resistance to Manchester’s blitz attack, but by now they had no answer to Emily’s very strong and direct running. This had yielded a double for her in the first half, and a double in the second half followed as the final two tries went to Emily and a final score of 72-7 to Manchester was recorded.

A spirited and competitive ‘practice’ match followed with the Bridgnorth and Manchester girls combining well in a display of girls’ rugby which was impressive to watch. It was clear that both teams would have preferred to play at least 10-a-side rugby but on the day it was Manchester who had adjusted to the demands of sevens better than their visitors.