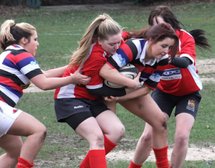 The girls from LSH have had an impressive run of results this season so a tough encounter was expected.

The home side kicked off and a determined chase immediately had Manchester pinned back near their own 22. The defence held firm with Manchester in control of the ball, but still uncomfortably close to their line. A loose pass from Manchester was seized on by the LSH forwards and the ball was forced back into the in-goal area. Some desperate defending saw Hannah Johnson reach the ball first, forcing her to touch down under pressure. Unfortunately the referee was unhappy with the grounding by Hannah who was advised that she was not in control of the ball. An early try was awarded as a result of this interpretation, converted to 7-0.

Manchester escaped their half from the restart with some relief but LSH were determined to return. The visitors’ defensive line was soon broken by a very flat pass and a dispiriting 12-0 disadvantage was already on the score board.

Manchester may have been shaking their heads at how they had conceded the first couple of tries but there was no argument with the third, as the home side showed their ability to find the right angle to cut through the defence for an impressive score, converted to 19 unanswered points.

Some short restart kicks were being punished by a streetwise LSH team who were quick enough to neutralise the territory advantage that Manchester should have been gaining. As a result, Leanne Murray was forced to kick for ground while defending and, as so often happens, a kindly bounce was gratefully picked up giving yet another score against a Manchester side who knew that luck was not with them either!

This did not stop some determined defence by the backs in particular. In fact, it looked as if a solid tackle by Lucy Colledge had dislodged the ball forward but LSH played to the whistle just as they should and benefitted from a try to take them to 31-0 with half time approaching.

Amazingly Manchester kept going with no sense of panic at the score, urged on by their captain, Charlee Chambers. Some crunching tackles by Charlotte Hockenhull and some superb chases of what appeared to be a lost cause by Hannah Johnson, meant that the home side were not having everything their own way. With the LSH girls squabbling, Manchester’s belief in achieving a respectable scoreline in the second half was growing.

Unfortunately that hope then took a knock as a flowing move along the LSH back line stretched Manchester’s determined defence so that the teams turned around with an unassailable 36-0 advantage to the Merseysiders. Nonetheless the half time team talk was able to focus on the positives of the last few minutes of the first half when Manchester had finally gained some control, had thwarted several try scoring opportunities and appeared to have rattled the hosts.

Manchester were anxious to capitalise on their restart and finally make their mark on the scoreboard. However LSH were equally determined to close the match out and this soon happened within the opening minutes of the second half as the home side secured the 43-0 league win that would be registered.

Having made the effort to travel to the game however, Manchester were keen to make the most of the afternoon and elected to play on in search of that elusive first try. Strangely, it was the losing team that seemed happier to do this and the game became increasingly disrupted. Anything like a firm tackle was objected to by the winning side, resulting in repeated confrontations and comments when play broke down which concerned the Manchester players.

Inevitably the game came to an unsatisfactory end when following such an incident, Charlee responsibly decided that neither her team nor the game in general was going to benefit from playing any longer. A polite request to the referee to call ‘no side’ was made and the final whistle was blown.

So, not the afternoon that Manchester had hoped for and a baptism of fire as Charlee captained the team for the first time. Although Manchester’s team spirit could not be faulted, points can only be awarded for tries and Liverpool St Helens left the field as clear and deserved winners, strengthening their position at the top of the league.