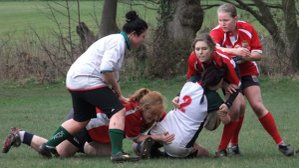 Manchester have found themselves strangely disadvantaged in earlier games when up against smaller squads. With Tyldesley arriving with the bare minimum of players, it was therefore important that the rolling subs were ready to make an impression rather than disrupting the side already on the pitch. This they certainly did and the coaches were able to use ‘impact’ rather than forced substitutions really well throughout the game.

A sleepy start however could have cost Manchester dearly when Tyldesley were allowed to follow up their kick off almost unopposed. A scrambled defence was not good enough in a 7s game and the visitors were worryingly seven points up in the first minute!

Although clearly unhappy with her team’s start, Charlee Chambers once again led by example as Manchester used the restart to their advantage. A long kick by Charlotte Hockenhull gained the territory and forced Tyldesley to concede a scrum near their line. An aggressive drive gave Charlee the chance to pick up and dive over the line to equalise, reducing the deficit to 5-7.

Sevens rugby has traditionally not suited Manchester‘s style and a couple of missed tackles exposed the defence so that Tyldesley extended their lead with a try and a well taken conversion to 5-14.

Once again the restart was well chased and Manchester confined play to the visitors’ 22. With Manchester on the attack, the Tyldesley defence were caught well offside and a penalty was awarded with Manchester pressing. As half time approached, Charlee saw the opportunity, tapped quickly and was unstoppable from five metres out to close out the half at two tries all, just 10-14 down.

With Manchester finishing so strongly and having the larger squad, the half time team talk was optimistic. Unfortunately the second half started almost as badly as the first when the kick off wasn’t caught cleanly and almost let Tyldesley in. Even though a five metre scrum was conceded, the Manchester forwards did well to spoil and won aginst the head, allowing the backs to escape their half. Tyldesley were difficult to break down however but as the Manchester forwards started to dominate it just seemed a matter of time.

Manchester have often looked ill at ease at 7s but in this game they somehow managed to bring their 15-a-side skills into play, as the forwards tried the rarely used 7-a-side tactic of the rolling maul to great effect! Rachel Twigg had her best game so far, punching through the defence and then holding on to the ball as the forwards pushed her forward. The combination of Rachel, Bethan Emuss and Molly Hastie twice gained huge amounts of ground with this tactic. This paid dividends with half backs Hannah Goddard and Leanne Murray being patient, waiting to take advantage of the disarray in the Tyldesley ranks. With the Tyldesley team being sucked in to stop the drive, Leanne was able to sprint to the line from her own half to finally give Manchester the lead for the first time at 15-14.

A second surge by the forwards soon had a similar effect and this time it was Hannah Johnson who was on scoring duty, converted by Leanne to give a significant eight point advantage.

The game was now slipping beyond the visitors’ grasp and Manchester dominated as the team kept its shape and momentum as the replacements came on. Leanne had been immense throughout the game but still had the energy to break the line and set up Hannah J who stayed in support for the bonus point try and an unassailable 27-14 lead.

From the restart, Georgina Burton, playing her first game for the club, caught a high ball as if she were born to the game, and charged back at the opposition. George’s strength and natural ball handling skills were evident even in this short game and she will undoubtedly be a real asset to Manchester. Charlotte made a few more of her trademark crunching tackles and it seemed unlikely with time running out that Tyldesley would be able to hang on to even a losing bonus point (-15).

However a breakaway try made sure of that for them, and was a fair consolation for their seven players who stuck at the task throughout the game despite the numerical odds against them. The whistle went as that consolation try was converted to 27-21 and Manchester celebrated a fine victory over their Lancashire rivals.

Charlee unfortunately sat out most of the second half with a recurring knee injury but had already done enough to be chosen as Player of the Match. Further good news came during the week as it seems that Charlee’s injury was not as bad as first thought.

Match photos thanks to Liz Broadbent are on the tab at the top of this report.