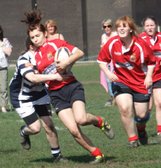 A lethargic performance by Manchester resulted in an unexpected defeat and the first win of the season for bottom club Eccles.

The first few minutes gave no indication of the disappointment to come when Hannah Johnson raced in for a first minute try, 5-0 to Manchester.

Despite Eccles’ poor run to date, their girls stayed motivated throughout and took Manchester by surprise when they broke through a ragged defence to actually take the lead by converting to 5-7.

Manchester then decided to sit back and not contest the ball, allowing the visitors a long period of possession. It seemed that little would come of this and Manchester’s patience was rewarded when a scrum was awarded for a knock on. This led to a great team try when first of all Lucy Colledge made the break with Amber Smith in support. Lucy needed to use Amber as she was closed down and it seemed likely that Amber would make the long run to the line. The Eccles defence was recovering however and did just enough to haul Amber down metres short. With the momentum and with Charlee Chambers available to pick up, a great team try was scored to restore a 10-7 lead.

This should have given the confidence to kick on and so it appeared when Hannah Goddard clearly caught the restart. Eccles were expecting a more measured build up but Hannah G fancied her chances and broke three tackles, sprinting to the line for a fine individual try. This put Manchester well in control at 15-7 with half time approaching.

Manchester unfortunately appeared to take their break early when the restart was simply not dealt with. Advantage was quite rightly played for the knock on but it seemed as if an imaginary whistle had been blown as the players in the area stopped playing and waved Eccles through for a second try, again converted to close the half out just one point behind at 15-14.

With three tries scored and a bonus point beckoning, Manchester just needed to turn up for the second half. They didn’t. Several missed tackles in the first minute allowed Eccles to take control of the scoreboard at 15-19 and alarm bells should really have started to ring.

A casual restart was penalised a little harshly when the ball did not touch the ground as it was kicked and Eccles had the advantage of a half way scrum. They made capital from this unexpected field position with a breakaway try, again converted, giving the visitors all the motivation they needed to hold on to a 15-26 lead.

Manchester showed their abilities throughout the game – but only in very short patches. Good awareness by Hannah J produced her second try when she quickly tapped a penalty to narrow the gap to a converted score at 20-26.

Hannah J seemed to be everywhere, in defence and attack, and when she crossed for her hat trick and Manchester’s five-try bonus point, it seemed as if the sloppy performance had been rescued. A fifth missed conversion however left Manchester still staring at defeat as the miss left Eccles 25-26 ahead.

With time now running out, the urgency and encouragement from the home support didn’t seem to be getting through to the players as only a few players appeared to appreciate what needed to be done with not enough support to accomplish it. A speculative Eccles attack was not closed down and this allowed the visitors to claim their own five-try bonus point as they increased their lead to 25-31. The referee decided that there was not enough time for a restart and a jubilant Eccles team were the only ones celebrating with their first league win secured courtesy of their five tries and, crucially, their three conversions.

This was a very disappointing weekend for Manchester girls, all the more so because of the high standards that they had set themselves in the previous match when they comfortably defeated league leaders Tyldesley. To be fair though, the team shrugged off the disappointment and gave warm congratulations to an Eccles team that had been working hard towards their first win. In the end, it was simply the case that Eccles ‘wanted’ the result more and they certainly got what they deserved.