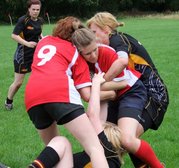 An excellent performance by Manchester Girls against the North Wales Region gave the girls and coaches a lot of encouragement for the coming season.

RGC arrived with a small touring squad but their request to play 7s because two of their contingent would be on Six Nations U18 duty for Wales next week gave an idea of the strength of their regional set up. Their squad which combined experience and a couple of newer players matched Manchester’s with a debut by Lucy Colledge and Jess Johnson moving up a level for this friendly.

The coaches decided to play three games of 7s, the best of three to be declared winners. This news wasn’t exactly welcomed by the Manchester girls who have somehow convinced themselves that "we aren't really a 7s team". Well, at least they had a chance or three on Sunday to disprove this to themselves.

The first few minutes were spent with the two sides testing each other out, both were competitive at the breakdown and both clearly well organised in defence. This in itself was a surprise as the wide open spaces at this stage of the season were begging for a missed tackle but boths teams kept things very tight and the game scoreless.
Manchester broke the deadlock with a try by Hannah Johnson who was soon on defensive duty when she tracked back to stop a certain score. The equalising try came just before half time however and was a fair reflection of the half.
After the restart, Jess Johnson soon joined her sister on the scoreboard when the team was alert to exploit a knock on advantage, allowing Emily Houghton and Leanne Murray to split the defence for Jess to finish, converted by Alyx Maw.
Manchester created some daylight when Amy Lees scored a peach of a try when she collected the ball from the back of the scrum, dummied to pass and then sprinted past the wrong footed defence.
Amy’s move seemed to have more of an effect than simply the points because immediately from kick off Hannah chased the ball, collected it and touched down under the posts to effectively put the game out of reach at 22-5.
Emily closed the scoring with a magnificent try which actually came from a defensive five metre scrum. With RGC in attack mode, the scrum was won and Emily was able to race the length of the field to register a 27-5 opening win.

RGC had by now had a chance to spot Manchester’s strengths and weaknesses and a change of tactics was not unexpected after the first reversal. The score by Jess almost from kick off was a real blow to the visitors and when Hannah doubled the score with Alyx adding the extras, RGC found themselves at an early disadvantage.
The new tactic by the visitors was clear but very well controlled by Manchester. Rather than trying to split the home defence with ball in hand, RGC starting using a couple of very capable kickers to lob the Manchester seven. This very nearly worked the first time, but for a determined Emily who was able to retrieve the ball and prepared a counter attack with Leanne. A clumsy high tackle was penalised and an outstanding performance by Emily was summed up when, stood on her own 22, she looked up, saw a disorganised defence in front of her (but seven players nonetheless!), and tapped and went all the way on her own.
RGC refused to lie down however and had the last word in what seemed a very long “half” to turn around at 17-7.
With RGC finishing strongly, Manchester were anxious to get the next score to hopefully put the match beyond doubt. They did so with a scrum against the head, again near their own 22, leaving Emily with another long gallop to secure the points. The fact that so many scrums were won against the head (and only one or two scrums lost all day) was a great tribute to the Manchester forwards, with Amber Smith, Emma Broadbent and Alyx Maw leading in that department.
With RGC again chasing the match, Hannah took the ball, in a position where it looked as if she was going to outsprint her opposite number to score. If there was any doubt about the standard of the RGC girls, the fact that Hannah (of all people!) was caught shows how good and determined the visitors were. Some great support play yielded the try to Amy however, matching the first game’s five tries.
A sixth was added as the game neared its conclusion with Harriet Parsons closing the game out at an impressive 32-7.

This was the match that almost never was! With the series won, the referee returned to the club house only to be summoned back as the girls lined up for a final tussle.
Manchester learnt a lot about themselves and their opposition from this final short encounter. The RGC girls showed tremendous character by wanting to play the game and then by a determined showing that almost left them taking the final honours.
RGC’s best passage of play showed just why these girls are in a regional set up as they took the game to Manchester, retaining possession and flicking the ball around looking for an opening. Very deservedly their break came and Manchester were sat looking at a 0-7 deficit with time running out.
Refusing to concede even this consolation game, Manchester started to get back into the game but found themselves up against a stubborn defence. Finally, a way through was found by Leanne but a disappointing day with the boot left Manchester still struggling at 5-7 with time running out.
A fitting finale to the series (from Manchester’s point of view at least) was the final score of the day when Emily, who had clearly been on a mission from the start, broke the RGC defence almost single handedly with a decisive run from deep in her own 22. Manchester therefore took the honours with a 10-7 win, but after an unexpectedly tough day for RGC, they certainly earned the admiration of the Manchester team and supporters with their determination and also the sporting way that they took this final disappointment.

RGC's sporting nature was emphasised when they awarded their nemesis Emily with the Player of the Day award in the clubhouse. A great team performance by Manchester was celebrated with Alyx taking an opening win as captain, and Lucy immediately established as part of the team after a very valuable contribution in attack and defence.