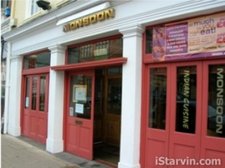 Thinking back on it we were tempting fate when our Asian eatery of choice for those of us staying in Worcester on the Saturday night happened to be called ‘Monsoon’...

...and that is exactly what we woke to on the Sunday morning, just as the weather forecasters had predicted. The short trip to Sixways for the Worcester tourists, and the long trip for those travelling down, was already worrying despite an early morning email from Worcester RFC that the pitches were fine and that the tournament would be going ahead.

We drove past the superb Worcester Warriors (Worriers??) stadium and facilities, and parked up to walk to the training pitches and changing rooms where the tournament was being hosted. Having battled our way from the car parks, through the underpass (which had become a very effective wind tunnel for the day), we registered and decided where to set up base. There was then a lengthy debate as to whether it would be responsible to erect the borrowed, pristine, white gazebo (thanks to Cheadle Hulme Lacrosse Club) or whether this was likely to result in the parents chasing the shelter towards the M5 with half of our squad attached. We left it in the car.

The previous evening had seen the first ever competitive “chicken...or cheese?” meal (you had to be there!) and the morning’s theme was now “gazebo...or boat?” Unfortunately we had arrived unprepared with no maritime equipment for the event, at a location that would have been just perfect for an end of season 10s tournament – but, let’s be honest, only in fine weather. It seemed that all twenty-odd teams entered, plus assorted parents and coaches, were going to spend the day in the changing room corridors getting in each other’s way.

The U18s knew they had been given a tough draw with Cardiff and Plymouth in their group, so, just to make it more difficult for them , we got them out early on to Pitch Two to “warm up” (ha ha). Then, after a good soaking, it was back to the changing rooms to wait for our game against Cardiff.

And what a performance the girls gave! With the wind behind Manchester in the first half, Cardiff found it impossible to escape their half against an effective and committed Manchester defence. It was only a matter of time before the Manchester girls scored, and that try came courtesy of Hannah Goddard who from a well won scrum was able to burst over the line to take Manchester to the break with a one try lead to defend.

It was now Cardiff that had the advantage of the wind, but Manchester were not prepared to let this one go. With the wind and rain in their faces, the girls snuffed out any Cardiff attack so that the tournament's Welsh representatives were left with no option other than to kick themselves into an attacking position. The tactic finally worked and an equalising score was made with a couple of minutes to go.

Two very strong teams had bravely played against the elements and each other to play out a 5-5 draw, but few would disagree that Cardiff had come off worse in terms of possession and territory. This was a great result against one of the fancied teams in the tournament.

Unfortunately it was obvious when we got back to the changing rooms just how brave our girls had been with Emily Houghton, Charlee Chambers and Emma Broadbent suffering from the effects of the bitterly cold weather as much as the tough game. They were not the only ones which became clear as other teams joined us, giving some concern about the welfare of the girls in the extreme conditions with little or no shelter for them to recover.

An hour later, with kit and spirits somewhat dampened despite the strong opening performance, Manchester took to the field against Plymouth. Emma declared herself able to at least start the match, Emily was still recovering and although Charlee led her team out, she was clearly in no fit state to play and had to retire. At this point the organisers had called a managers’ meeting to decide whether the tournament should continue.

As Manchester’s remaining nine players kicked off, word started to come from the organisers that the tournament was going to be abandoned. Manchester resisted a fresh Plymouth side (this was their first match of the day), with the team spirit making it a very competitive game until the referee blew the whistle for the match and for the tournament to finish.

There is no way that a Player of the Tournament can be picked – the whole team deserved that title on Sunday. Every single player (U15s & U18s) that said they would play at Worcester arrived on time, ready and willing to play for Manchester in the most atrocious conditions.

So, ‘Survivors of the 2012 Worcester 10s’ and joint ‘Players of the Tournament’ are:

...and a special mention and thanks to Ian Murfitt for being the match day coach, and to the parents and families who travelled down with the girls. You all provided brilliant support and encouragement to the squad who did us proud on an awful day.

CLICK HERE or on the tab at the top for photos by Liz Broadbent.