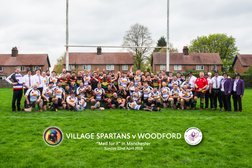 Spartans have a brilliant day with touring team Woodford RFC

Rugby, Fun, Beers, Food and more Beers! The spirit of rugby is alive and well.

Sunday saw a load of Spartans enjoy a properly entertaining and good spirited day of rugby with Woodford RFC who were up on their 2018 Team Tour and going "Mad for it" in Manchester.

It was a great experience with loads of our newest players joining a big squad made up from the whole club, with a few playing their very first game time against another side. Even our DOR and one of the Coaches got some time on the pitch.

With masses of players and spectators on the sidelines, the friendly 80mins was split into 20s with everyone getting a go on the pitch spanning all ages.

As a huge sign of solidarity, all the Woodford lads wore rainbow Duck Tape as armbands and Rainbow laces too - both a brilliant and genuinely meaningful gesture.

The third half in the clubhouse included a Kangaroo Court which was hilarious followed by Woodford inviting our players on to their barge tour of Manchester's canals with the night ending up in Bar Pop and Canal Street.

The last Spartan standing was Gaz who even received a guard of honour from all the Woodford lads as he left - bringing a lump to his throat.

Spartans want to thank Woodford for such a fantastic day that everyone enjoyed and put up there as one of their best days out of loads of great days being a Spartan.

Over 75 photos of the match are available here