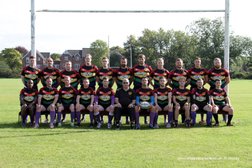 Spartans book their place in division 3 next season after they hold off the challenge of Aldwinians to win 33-17.

Before the the game the Spartans knew that 5 more league points would secure promotion (4 for a win, 2 for a draw and 1 for a loss).

With a lot of home support on the touch line the Spartans got off to the best possible start. From the kick off Aldwinians failed to secure the ball in their 22, Spartans flanker Matt R (‘Noodles’) dropped on the ball, then passed off the ground to fly half Harry E in support who powered his way forward from 10M and drove the ball over the try line. Smithy converted 7-0 Spartans after 1 minute!

The next try came 10 minutes into the game as from the Spartans 10M line outside centre Chris C broke the defensive line and sprinted off 40M for the try line chased by the cover defence who could not catch him. Chris scored, Smithy converted 14-0 for the Spartans.

Aldwinians were not prepared to give up and for the next 10 minutes they controlled the game with lots of possession and territory in the Spartans half. Eventually under mounting pressure the Spartans defence cracked and Adwinians found a gap and scored. Their conversion missed, the Spartans lead was cut to 14-5.

Both sides had opportunities to score in the time remaining in the first half but could not finish any off. The Spartans also lost fly half Harry to injury. Chris C moved to 10 and Brad came on in the centres.

Adwinians then got themselves back into the game early in the 2nd half, from a line out in the Spartans 22 they attacked in field and found a gap in the defence to score under the posts. The conversion was made the Spartans lead was cut to two points 14-12.

The pressure was now building on the Spartans as Aldwinians made the game a fierce contest, were the Spartans promotion hopes slowly crumbling? Once again each team had chances to score but could they not finish off the last part of the move. The scrums moved to uncontested as Aldwinian’s had lost a front row player.

The Spartans applied pressure in the Aldwinian's 22, after a number of phases the defence was condensed allowing Captain and Flanker Dean to outflank the defence running wide to off load to winger Carl H, who ran around and in under the posts. Smithy converted, 21-12 for the Spartans.

At a Spartans uncontested scrum on their own 22 Chris C at fly half received the ball and attacked the Aldwinian’s defence. Chris’s pace, quick feet and strength breaking the first up tackle has proved difficult for most teams in the league to shackle. Chris broke the defensive line and had 60M to go to the try line, he weaved his way through the cover defence to score. Smithy converted 28-12.

With a gap on the score board the Spartans just needed to hang on now. However, the Spartans increased their lead as prop Poni returning to play for the 1st team showed his strength and character after a quick tap on the 5M line, he powered over to score to the delight of the supporters and players. Smithy’s conversion missed, 33-12 with 2 minutes left to play.

Adlwinian's finished with a flourish and scored with the last play, as their tall strong running flanker weaved his way across the pitch and knocked off two tackles to score, the conversion was missed 33-17. The ref blew for full time.

The Spartans Players and Supporters celebrated as the win set up back to back promotions and that the Spartans will be playing in division 3 next season. The highest level they played at in their 10 years in the Northwest intermediate league structure.

2nd and 3rd teams: In addition the 2nd team will enter the league structure next season in division 5 providing another team and level to play competitive rugby. With the formation this season of the 3rd team, there is also a place for new players to begin playing rugby with the Spartans.

Thank you to Adwinians for a very competitive game, the good spirit they played the game in, plus their support and congratulations to the Spartans after the game on gaining promotion. True sportsmanship.

So the Spartans have one (rearranged) game left, at HOME on Wednesday 27th April, kick off 7.10pm V Dukinfield. The game just has to be played for the Spartans to gain the one point they will require to confirm promotion. With a few 1st team injuries and some tired players, a few 2nd team players may well be called up to play on Wednesday evening.

The result for the Spartans on Wednesday is now immaterial. The hard work work has been done across the season with consistent performances and results by the players who deserve their promotion.

Until Wednesday, there is still time for the small niggles and big hang overs to recover for players to play some part in the game.

The Village Spartans - More Than Rugby!