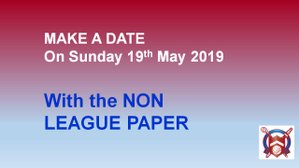 A few of the dates you've been asking for!
The season is barely over, and already you've been inundating us with messages about when the new one will start! Well here are a few dates for your diaries.
First and foremost, on Sunday 19th May we will find out our constitution for the forthcoming season. The FA have taken the unusual step of announcing this via the marvellous Non League Paper, so get out and grab a copy on Sunday morning to find out who has been placed in which league.
Next, when will the new fixtures be released? We have to be guided by the FA on that, but the answer is 'Mid-July.' Once we have a firm date, we'll share it and you can set your alarm to find out whether you'll get an early trip to the seaside and a Christmas derby.
Finally, the start date for the new season is August 10th- however that date comes with a caveat. Our Premier Division will kick off on 10th, all other Divisions a week later on 17th. The reason for this is that the 10th is the date of the FA Cup Extra Preliminary Round- any of our Step Four clubs who don't feature in this may be able to kick off their League Cup campaigns if they wish!