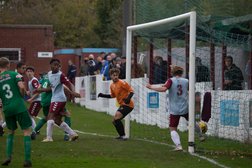 Foresters through to next round

The very young home side began brightly, creating several early chances, although the Foresters responded with two goal attempts on 17 minutes which saw Mangos keeper Jakob Glover twice block goal-bound efforts on the line. However, within 60 seconds, Cinderford took the lead with a low shot from Will Gibbons, which found the bottom right-hand corner of the net. Mangotsfield responded with a shot from Olaoluwakitan Jaiyeoba being well saved by the Foresters’ keeper Nick Jones, after a neat team move. Play was fairly equal for a spell, as both sides tested each other out, but Mangotsfield’s woes continued, as Cinderford made it 2-0 on 37 minutes with Matt MacDonald netting from close range, following a corner.

The visitors’ lively winger, Zac Drew, a thorn in the hosts’ side right from the off, almost made it 3-0 before the interval, after breaking through on goal down the right, but he fired over when well placed.
HT: 0-2
The second half saw Mangotsfield begin strongly, as substitute Harry Haughton saw his 20-yard strike tipped around the post by keeper Nick Jones on 47 minutes. One or two other Mango efforts went close as well, with the game flowing from end to end, but Cinderford used speedy winger Zac Drew as often as possible and he almost made it 3-0 on 75 minutes when, having outstripped the home defence, his low drive was tipped around the post by home keeper Jakob Glover. Home hopes were raised, however, on 77 minutes when Matthew Binding netted from close range following a corner to make it 2-1 & the Mangos were back in the game.

A frantic finale saw Mangotsfield trying their best to save the game as substitute George Neill fired over from 15 yards (78) and then Olaoluwakitan Jaiyeoba could have levelled it in added time, but he fired wide after a darting run through the visitors’ defence and Cinderford stood firm to earn their place in the next round.

The next game at Cossham Street will be the visit of SLIMBRIDGE AFC on Saturday 24th October 2020. Kick-off 3.00pm