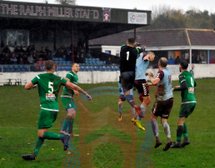 An already very wet Cossham Street, saw more heavy rain arrive an hour before kick-off, and continue during the whole game. Despite their efforts, the hosts never seemed to adapt to the conditions, whilst Cinderford always seemed fleet-footed, and were deserved winners.

Keeper Marko Radovanovic made a welcome return from injury (thanks Liam Armstrong for your good work), but the hosts are still beset by injuries and unavailability, with central defender Keith Kearney missing. Radovanovic was busy during the opening stages, stopping a shot near his right-hand post from Jarrad Welch, and being alert to a volley over the top from Lorcan Sheehan, and another effort from Welch.

The Foresters took the lead in the 20th minute from the penalty spot – awarded for a wayward tackle – converted by Craig Norman. 0-1. Cinderford came forward once more and Ethan Moore turned quickly and saw his goalbound volley held by Radovanovic, and Sam Turl then tested the home keeper with a snap drive.

The visitor went further ahead in the 26th minute when Josh Hunt stabbed the ball home from close range, despite a crowded goalmouth. 0-2.

Ethan Moore again tested Radovanovic with a strong headed effort, which the keeper smothered at his near post. Mangotsfield had made little or no impression and just before the interval, their first real opportunity came from Jordan Rogers. His effort was wide of the far post.

The result was more or less settled after 54 minutes when Josh Hunt grabbed his second when he turned in the box and fired home from 6 yards.0-3.

A poor clearance by Radvanovic, due to the now heavy conditions, gave Lorcan Sheehan a shooting chance, but he dragged his effort wide.

There were further opportunities for ‘The Foresters’ to add to their tally, with a defender blocking a strong volley from Ethan Moore, and substitute James Harding broke free, bearing down on goal but blazed his effort over the top.

The hosts gabbed a consolation with six minutes remaining, through leading scorer Dan Demkiv, who turned in his 8th goal of the campaign. 1-3.

The next match at The KPI Ltd Stadium is on Saturday 9th November 2019, at 3.00pm when ‘The Robins’ of BIDEFORD AFC will be here.