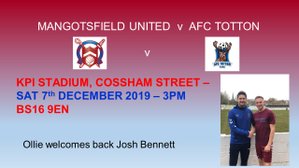 Mangotsfield United will only have themselves to blame for not closing the game down after visitors AFC Totton snatched a 92nd minute equaliser in a niggly encounter at Cossham Street, which saw 6 bookings & countless free kicks.

With home striker Dan Demkiv heading over the bar in the first minute, it was the visitors who took the lead in the 5th minute, with Adam McWilliam lashing a free kick into the roof of the net from just outside of the penalty box. Mangotsfield responded positively, with Ben Brooks seeing his 20-yard shot saved on 10 minutes. However, we were level on 16 minutes when Dan Demkiv chased a long through ball & cleverly lobbed Totton keeper Matthew Hall from 15 yards.

The Mangos stepped up the play with a spell of pressure, which also saw defender Jack Goodall’s shot from 25 yards saved on 30 minutes. Totton’s Adam McWilliam also saw another free kick of his blocked in this time, as well as seeing a long range punt at goal hit the side netting after a mis-placed clearance by Mangos keeper Marko Radovanovic. Nonetheless, we took the lead on 36 minutes when Dan Demkiv bagged his 2nd goal from close range following a corner by Thomas Llewellyn. Totton were occasionally dangerous, particularly from free kicks by Patrick Nolan (38) & Adam McWilliam (40), but they almost went further behind on 42 minutes when Jack Goodall’s 40-yard cross went just over the bar with keeper Matthew Hall well-beaten. However, one minute later, Mangotsfield did go 3-1 ahead as Dan Demkiv skilfully completed his hat-trick, again chasing a long ball down the middle, before firing home.

In the second half, Mangotsfield could have gone further ahead straight from the kick-off as Demkiv, chasing his 4th goal, fired just wide after a good through ball. Totton quickly re-grouped to come more into the game themselves, especially when a through-ball lob towards goal was cleared away for a corner by James Byrne. Mangos forward James Ollis was then unlucky to see his goal-bound shot cleared off the line by a defender. Totton pulled a goal back on 57 minutes when Patrick Nolan netted from 20 yards to make it 3-2.

The visitors then showed greater urgency as they pushed forward in search of an equaliser, but the game also became more niggly as a result & the referee was always kept busy. James Ollis & Ashley McGrane then both missed good chances for the Mangos to have put the game to bed. Ollis fired high & wide after a neat team move (68), before McGrane fired wide from 15 yards in another decent team move. The final few minutes saw Totton try everything they could to save the game, including going close from yet another free kick by McWilliam. After a good save by keeper Marko Radovanovic, the hosts were duly punished 2 minutes into stoppage time when Totton sub Oliver Bradley netted from the edge of the box to snatch a point for the Hampshire side.

Disappointingly, it was later learned that Ashley McGrane has decided to leave the club and link up with Roman Glass FC. The club would like to thank Ashley for his input and efforts in the Sky & Maroon.